As with the name Anthologica, the etymology of Isharia is a matter of hotboiling discussions that end in broken families and costly divorces.

Almost all scholars agree that the name is of Swahili origin, from hara "district, quarter" or "to be terribly frightened, to defecate, to purge" + -ishi "to live, to exist; to dwell", thus meaning "place to be terribly frightened" or "poo dwelling", in its primitive form *Haraishi. The elements were reversed shortly after the place was founded as a city, thus becoming Ishihara.
Izambri a week ago

Banknote Design 1.0 – Design, Aesthetics, and Choices (to be continued)

When I was almost six, my family moved to Germany. This was back in the days of the Deutsche Mark, so imagine going from the (then) monochrome and boring US banknotes to these bright, colorful German banknotes with different people on them, unique designs, and, as I later found out, a celebration of German artists and scientists. And about a year later, we took our first trip to Italy, with yet two more different currencies (Austrian Schillings and Italian lire), which was even more fascinating. So, ever since then, I've been a banknote collector, but more interestingly (to me) is that I like to design my own banknotes for fictional currencies.

So, what goes on a banknote? Banknotes, in a way, are a country's calling card: by looking at them, you can learn something about a country's culture, what and who the country finds important, and the like. And almost anyone visiting a different country will likely encounter a different currency, so the currency should (to me) make a good impression.

There are two aspects of the design: what and how.
In this article, I want to talk a little more about the what.

Let's first start with a real-life example of a banknote. 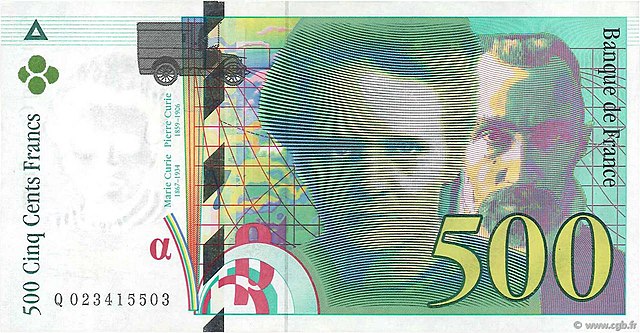 This is the old French 500 franc note (~€76). When you look at it, apart from the color scheme, there are two people who are quite prominent: these are the Curies (Marie and Pierre), pioneers in radiation research. You can see some assorted radioactivity-related motifs on the front as well.
Now let's have a look at the back:

The back is a science laboratory, in particular (probably) the Curies' laboratory. It's related to the front (though this always isn't the case), but all of the French banknotes have some sort of theme between the front and back to tie them together. (This is also the approach of the Deutsche Mark notes, the 8th series Swiss notes, some of the Korean won banknotes, and the like.) Other countries have a bit of a disjoint, where there's not really a relation between front and back, but the two sides are both culturally-relevant (e.g. Polish złoty, Swedish krona, Japanese yen...).

Picking people for banknotes can be controversial, however. Argentina recently removed all the people from their notes in favor of animals and there's been ongoing controversy in the US over changing the designs of the dollar notes. That said, it's said that using people is a bit "safer", since the public is more acutely aware if something's wrong with a face that they know than with a generic building, animal, or scene. (Also possibly why China went from using 'unknown' people on their notes to Mao Zedong on all the renminbi notes since around 2000.) Often, if there's one person on all notes, it'll be a founder, liberator, or important person to that country (e.g. Bangladesh, Pakistan, and India all use a single person for each of their notes; Sheikh Mujibur Rahman, Muhammad Ali Jinnah, and Mahatma Gandhi, respectively) or a monarch (e.g. Queen Elizabeth II on all Bank of England notes). Living people are rare unless they're a monarch or have an otherwise inflated ego.

One of the most recently-completed banknote series I've done is for the Ilian dénar. Ilia's a country with a bit of an unusual history, and the recent history is very turbulent. Therefore, the main motifs are less-controversial kings and rulers from the past who united the country or otherwise ruled with minimal controversy and bloodshed.

Here are the obverses of the Ilian banknotes:

As you can see, there are two separate people on the fronts: these are two of the first Ilian kings. (Originally, they all featured the same person on the front.) These were chosen to be largely noncontroversial (the first Ilian kings are largely noncontroversial, especially compared to recent history), much like how Polish banknotes use old Polish kings on their obverses to commemorate Polish pre-Partition history.

Because my actual drawing skills are quite lacking, I repurpose photos from my trips, from gracious donations, and the public domain into depicting scenery/places/people relevant to the concountry. Fortunately, Ilia has enough diverse scenery/landscapes where I can kinda justify choices.

Let's delve a bit more into one of the banknotes, namely the ten thousand (because OMG MONEY):

The obverse (at top) features an image of Pocóg, the first king of a united Ilia who is considered the "founder" of the single united Ilian nation, while the reverse shows a view of a mountainside lake not far from the Telemor-Ilian border. Each Ilian banknote features a different scene on the reverse, either architectural or natural, the idea being to showcase Ilian beauty. At the same time, complex images, like scenes such as that, are difficult to counterfeit well, especially if it's something that's recognizable readily.

A recurring motif in all the notes, though, is from the Ilian coat of arms and the five stars (arranged in a diagonal). Having the coat of arms of the issuing country (or seal... or emblem otherwise) is standard practice in many countries and helps with identification. The French example doesn't have one (but, then again, France does not have an official coat of arms), but many notes do (ex. Euro notes and the European flag, English notes and the Bank of England seal...).

When designing notes, color is another important thing: what colors do I want to feature? Think about literacy (if your conpeople are less literate, then having similarly-colored baknotes may not be a good thing, like a tale in Pakistan about people confusing 20-rupee notes for 5000 notes, or in Korea between the 5000 and the 50000 won notes), about whether or not banknotes are the same (or close to the same) physical size...
bloodbath, Ph.D. 12 days ago 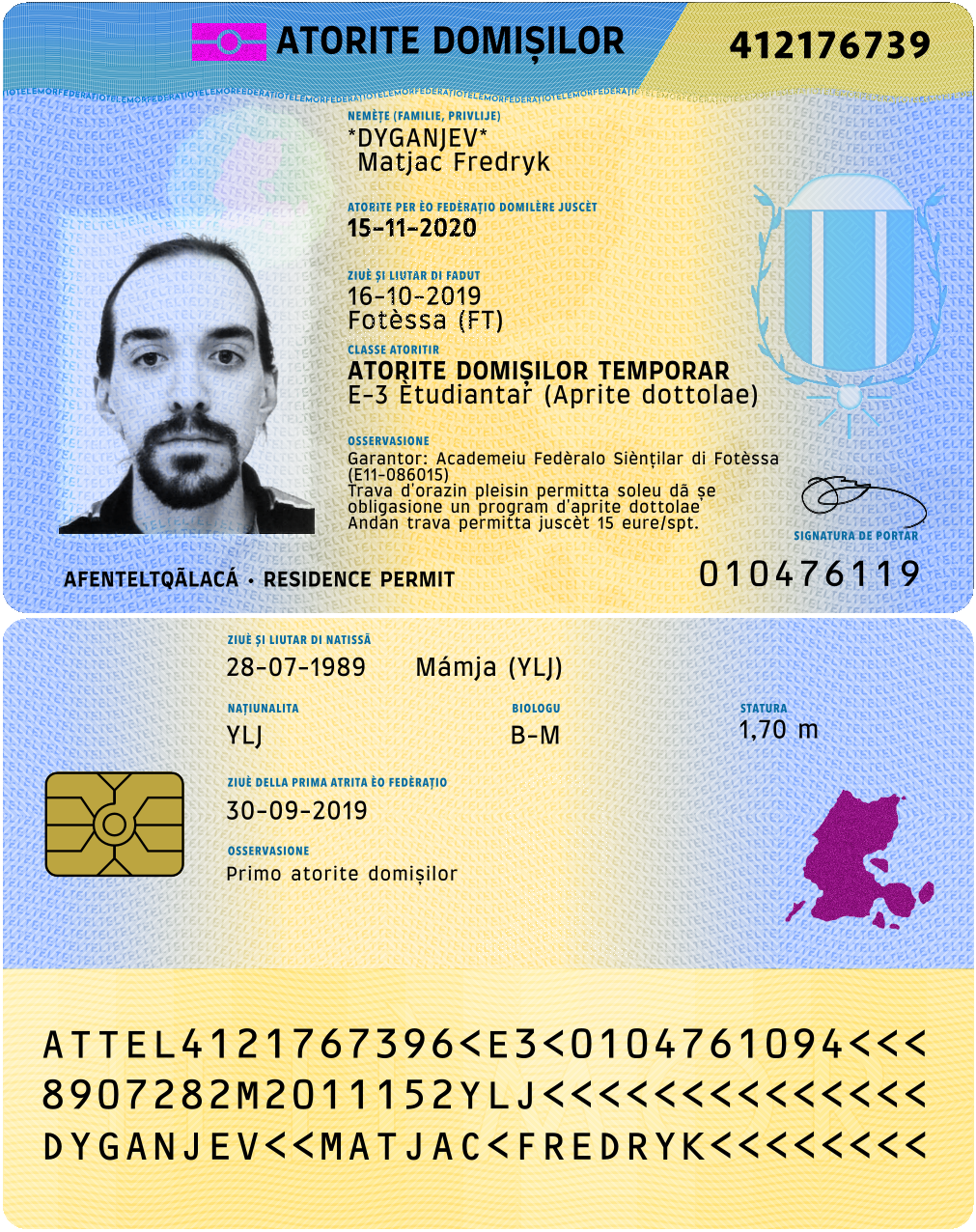 bloodbath, Ph.D. a month ago

Annie is six years old now! This is classically the age at which parents of children divorce, so if we survive 2020, we should be fine. In the meantime, I would like to remind everyone that the Site History page is a great way to take a look at what people have been up to. Especially the ones who don't post on the forums (come post on the forums! We're lonely).
News read more (1 comment) · 2 months ago

Fiddling with some stuff while procrastinating on writing my thesis, this time an Ilian driver's license. Happy with how it turned out. 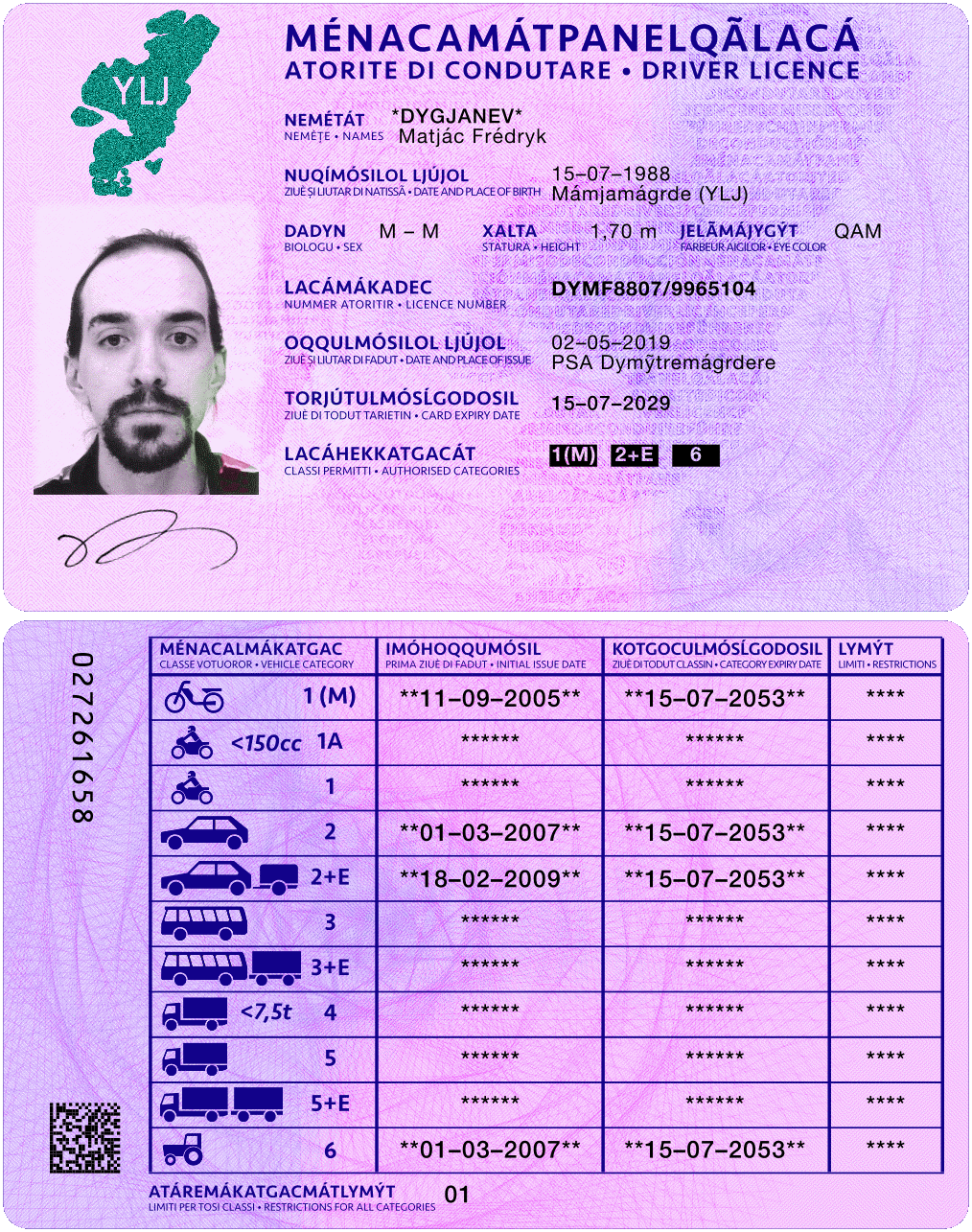 That's right, you can now finally move things around without having to laboriously copy the contents. At least, languages and language families, which you can both assign to any universe or language family you have comment privileges on. Just click edit and look for the move link at the bottom!

This functionality also automatically assigns the correct group to all child pages recursively, so what used to be an impossible task is now a possible, even easy task.
News a year ago

Image uploading is now fixed! A module misplaced in the migration was mandatory. Its moniker: Imagemagick.

Anyway, I believe this primarily affected changing avatars and other tasks that required thumbnailing; simply adding images to articles is ostensibly unaffected.
News a year ago

Izambri's troller scale, generated from an isharia discussion and structured from this.

PLAYTIME, CYBER-BANTERING
Fortitude required: disincentivising action required in support of any victim that should reasonably be expected to be of below normal fortitude (e.g. children and vulnerable adults).

TACTICAL, CYBER-TRICKERY
Fortitude required: Minimal action required in support of any victim that should reasonably be expected to be of normal fortitude (e.g. persons who have little contact with the members of the public).

STRATEGIC, CYBER-BULLYING
Fortitude required: Moderate action required in support of any victim that should not reasonably be expected to be of a person of above normal fortitude (e.g. people who are not in public-facing roles).

DOMINATION / CYBER-HICKERY
Fortitude required: Significant action required for any victim that should not reasonably be expected to be of beyond normal fortitude (e.g. people who are not public figures).

We're now on PHP 7 at long last, and the thumbnail generator is fixed. Welcome to 2019, everybody.
News read more (2 comments) · a year ago

In continuing my revisiting of old projects, I decided to re-do the design for the Telemor entry visa. And, because reasons, how about a pic of it in action, along with some stamps: bloodbath, Ph.D. a year ago

Back to the Drawing Board

Due to a confluence of various things, I decided to start revisiting some old art projects. And by art, well, I mean banknotes. Hence, here's some preliminary output for redesigning Telemor banknotes: The big change here is I decided to have all the notes be polymer. Having a mix of paper and polymer is a bit strange, and I only know of Singapore, México, and the UK where this is the case. Plus, polymer tends to be more durable and counterfeit-resistant overall, so it seemed like a good choice (and logical one the Telemor government would take).

This also gives me practice with playing with polymer notes, and I'm more than happy to experiment and see what works in that regard. (Because reasons.)

The book, Origins of Janochia, is complete for the most part.
Any changes done to it will be minor changes.
Further books will be made in the future.
Janochia 2 years ago

I have started the world building of Janochia as well as its common language, Tąrapeg.

Since I can't come up with names right now.
I'll use the respective D&D names as placeholders until better names are produced.

Uppishiun is an original name and entity.
Janochia 2 years ago

This universe is now available to view. I will be placing information about this world here along with story ideas.
Janochia 2 years ago

This is the first post to introduce my world in production.
It is heavily influenced by Dungeons and Dragons due to my gaming experience.

This world is called Janochia.
The setting spans from its origins to its end of days.
It'll be an expansive project, but I am eager to complete it.

I have a conlang that I'm developing to go with the setting as well.
This is the common language of the surface world, known as Tąrapeg.

My linguistic intentions with Tąrapeg is to make an aggultinative language
inspired by the Old Turkic Language. It probably will be either synthetic or polysynthetic.

Places I am at

As far as conlang stuff I've been most active on ConWorkShop lately, where my username is simply nadiarwendt. link
don't expect any forum posts on cws either, tho

I'm on twitter as nadiarwendt as well and that is where I post most of my art and ramble about things that don't matter. link

I have an actual art blog, without the rambling, on tumblr.

I also have an account on Artstation—again, just my name: link
nadiawendt 2 years ago
older