Welcome to the Tower of Tongues, the place for articles related to languages, both spoken and written, with the focus on Bredezhanya, that corner of Taura where almost all we talk about happened.
Many are the languages spoken, and some were lost forever with no remedy. The languages involved are Mintani, the first language spoken in Taura, developed by the Primicerians to talk to the roaming creatures. Some humans learned the language, and soon they developed their own tongues: Elnian, the language of the enduring humans on the Far Western Lands, the Lands of Waterwinds; nKûd, the first language of the Dwarves, keepers of the Secret, the short stocky humans created by Gam Tinoc, his favourite human race. And among Men, the rogalian race, many languages were forged: Sate, Madinesian, Marnuncian, Bernic, Peran, Cassardian, Hellesan, Tassalean, Siganyan... a myriad of tongues spread all over the Five Lands and the Five Seas.

Sate, Peran and Hellesan are three related languages spoken in the Hellesan archipelago or Hellesanya, in the eastern Megadelanean basin (for a map of the Megadelanean basin you can go to the Hall of Maps). Sate is a language with its roots in the night of time, and we don't know much of it except its writing systems, Sateu 1 and Sateu 2, and a few grammar notes thanks to the efforts of modern linguists. So unknown are Sates to us that the name Sate was created centuries later by archaeologists, using Peran satias "true, truly" to imply that the civilization they were digging up was the original one, mother of both Perans and Hellesans. The highly sophisticated Satic civilization found its downfall after a series of invasions; the barbarians, though, mixed with the superior culture they found in Caledia and other Minean lands and gave birth to a new culture, the Perans. The Peran language is partially evolved from Neosatic, the new Satic tongue developed during the Minean invasions with foreign elements. The Peran civilization is known as the White Palaces Culture by historians and archaeologists, a collection of competing princedoms and city states. Its starting year, according to mythology, is 171, when hero Ferseu founded the city of Targantassa, in Tavissa, the first of its legendary Twelve Foundations that led him to the throne of Annegimas, ruling all Perans and the remaining Sates as a single nation. The White Palaces Culture ended around 1300 with Alauda as its last leading city state, when the Sardanese peoples migrated from northwestern Armasca, after the downfall of the legendary Madinesian civilization, to other shores throughout the Megadelanean sea. A pact was made with the Peran princes, and the Sardanese chief, Lavindol, was elected king of all Perans. The title was more nominal than effective, but it served Lavindol and his successors to create an empire that dominated the Megadelanean waves and lands and beyond. Thus was created the Kingdom of the Perans and Sarden Empire. The king-emperors ruled the Empire for half a millenium, using and promoting their native language, Sarden, in the conquered or taken lands, while the Peran princes enjoyed a comfortable autonomy in the archipelago, keeping their language, customs and traditions. Slowly and steadily syncretism melted both cultures into the Sardanyese culture, and after the empire's dismantlement the Peran spoken in the isles had evolved into Hellesan, with Tassaleu, closely related to Peran, was born in Tassalea.

Hellesan, like Middle Peran and Sarden, is written in the Amansard alphabet, the evolution of the old alphasyllabaries used by Sate and the archaic Peran tongues. The archaic style, Sateu 2, used in Neosate and Archaic Peran was turned into a real alphabet during Ancient Peran, and in the Middle Peran stage Sardens took and perfectioned it, developing a new style, sentival, used in stone and metal monuments. A cursive variant was used as well, but in the Late Empire it had been abadoned not without giving birth to new writings in the SW provinces. Meanwhile in Eurede and Hellesanya scriveners developed a renewed style using calligraphic brushes and quills, creating the style used today.
Other writings developed independetly in regions like northern Eurede and the Waterwinds Lands. The diagram below summarizes their characteristics and mutual relations. 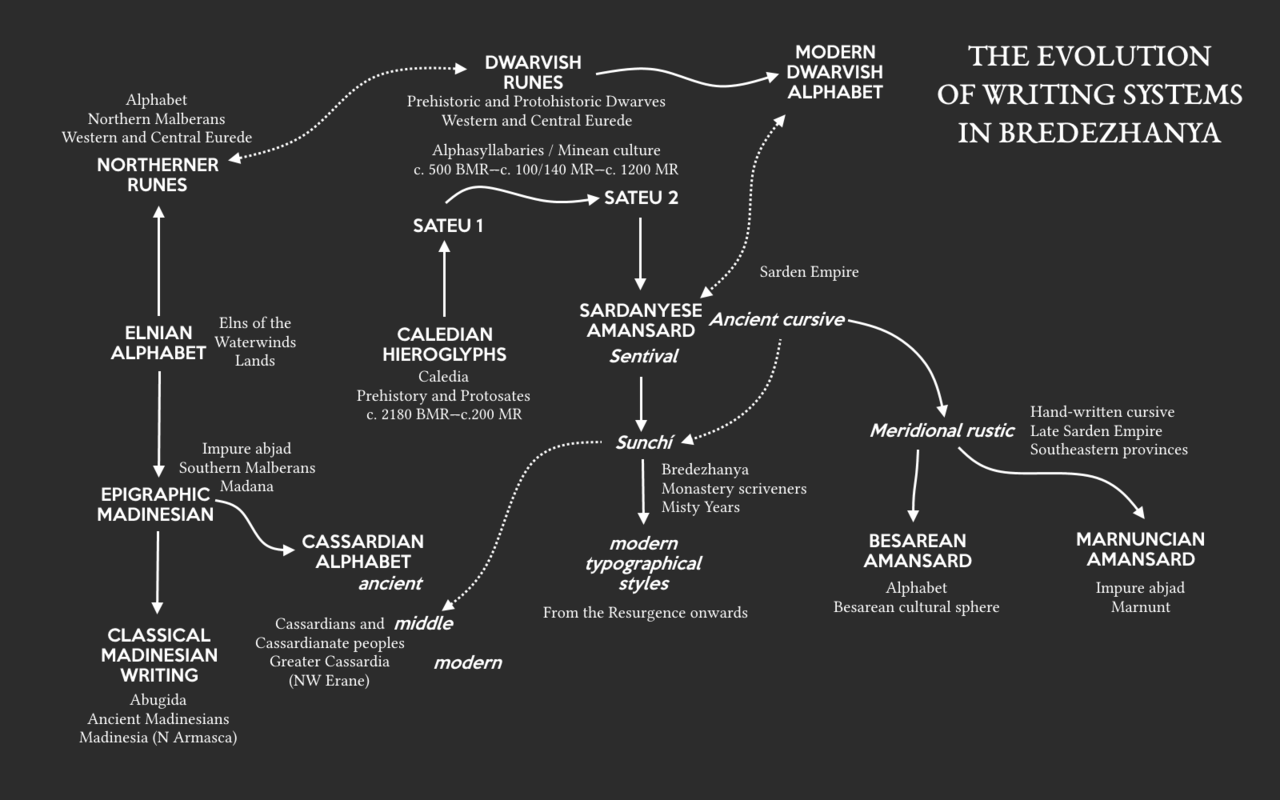