The Chiqqēl
A forgotten people
Anthologica Universe Atlas / Universes / Miscellanea / Sebastic (Echqīli/Seqel) / The Chiqqēl
The Chiqqēl (sg. Echqīl, pl. Echqīlīn) are a Semitic people of unknown origin. Though they seem to have settled in the region of Canaan, they do not seem to be Canaanites themselves. Instead, it seems they conquered Dor from the sea, and established a colony there around the 12 or 11th century BC. Where they came from has been lost to history. Echqīli legend claims they were seafaring nomads. In truth, they were most likely settled elsewhere along the Mediterranean, and the settlers in Dor may have been a class of warrior-fishermen, perhaps hired as mercenaries by a naval power to give the Phoenicians trouble. 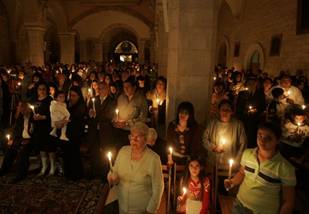 Their relationship with the ancient Israelites was complicated, but they were quickly engulfed into Israelite culture. Nonetheless, they maintained a separate identity, and rebelled when oppressed. A catalyst occurred with the arrival of the Prophet Elias, a missionary sent by the Kingdom of Judea to spread its religion. Reflecting societal divisions in the region, a parallel Echqīli religion developed alongside Samaritanism — practiced in Israel — and Judaism — practiced in Judea. According to the Chiqqēl, theirs is the religion of Elias, and God's holy temple belonged on Mt. Carmel.

Nonetheless, the Chiqqēl were among the first converts to Christianity, and were the first ethnic group to completely convert. According to them, the community's conversion is recounted in Acts 8 and 9. Under the Byzantines, they were primarily located within the Sees of Sebaste and Sycaminum, and became known to outsiders as Sebastians.

In the 5th century, Christianity in the Middle East was shaken by controversy over the Council of Chalcedon. The official stance of the Sebastic Church in this period remains unclear, with certain contemporary sources suggesting dissent with Chalcedon. It is clear, however, that Sebaste initially opposed Byzantine imperialism, and communion with the Church of Jerusalem may have been severed for a time. Contemporary accounts suggest that the Sebastic community was far more sympathetic to the non-Chalcedonian communion by the reign of Justinian II, but no theological treatises have survived. During the Islamic Conquests, however, and particularly during the reign of Amīr Umar, there was furtive embrace of the Byzantine church by the Sebastic community. During this time, they seemed to have adopted the Byzantine rite, but remained quite active in the use of the Sebastic language. Today, virtually all Echqīlīn belong to the Eastern Orthodox Church.

The overall quietist nature of the Chiqqēl, however, has led to its decline by assimilation. By the mid-20th century, only about 66,000 were left. Expulsion and emigration have prevented population growth in post-1948 Israel and Palestine. Today, estimates of 75,000 are generous, though another 175,000-190,000 can be found in the diaspora.

A map of Echqīli communities in 1947.