The Hellesan language is written with an alphabet named amansard "alphabet". The name comes from the first three letters of the same: a, m, n plus the element sard– from sardenos "Sarden", since the alphabet as we know it today was established in times of the Sarden Empire. The use of the Hellesan amansard is regulated by orthographic norms that also set the rules for the the different forms, serial and typological, that each letter can adopt, the diacritical marks that can accompany them, as well as the writing's punctuation marks. Regarding words' shape the use of the Hellesan alphabet is based on phonologica, etymological and graphic tradition criteria, making Hellesan orthography a not perfectly homogeneous and regular system.

Hellesan orthography has been regulated since the language was written, more than 1,000 years ago. The language's evolution made necessary a series of orthographic rules that were set in three different moments: the 22nd–23rd centuries, with the Dartesacres' copious work, a group of intellectuals and humanists; the Great Reform, which put the rules of the language's standardization following based on the Royal Chancellery's language model; and the reform of 3139 which, based on Bedort Baidí's dialectological studies, set modern Hellesan's orthography with dialectal and etymological criteria settled on the classic orthographic tradition.

The evolution of letters from Sate

Hellesan Amansard is an alphabet of twenty four letters, the native variant of the Sardanyese alphabet for the Hellesan language. This alphabet was an adaptation of Archaic Amansard, the alphabet used by Ancient and Middle Peran, and in its turn it's derived from the alphasyllabaries known as Sateu 2 and Sateu 1 used by the Satic tongues.
From the Satic syllabograms that Archaic alphabet was derived, but around the 14th century the sentival "formal" style appeared, being used in Middle Peran and Classic Sarden for monument inscriptions on stone and metal; it was complemented by a cursive variant used in informal texts on papyrus or waxy paper, based on the former. Shortly before the Sarden Empire's disappearance that cursive had evolved into the southern rustic writing, a variant widely used in the Empire's south-eastern territories; this rustic writing was the mother of a few alphabets and an impure abjad in Marnunt and Besarea. On the other hand Euredean scribes, in the Misty Years, developed a new style, sunchí1 "scrivener's pen", a formal cusive based on sentival and with certain influence from Sarden's old cursive, then completely superseded. Amansard's modern styles, upper case and lower case, are derived from sunchí. 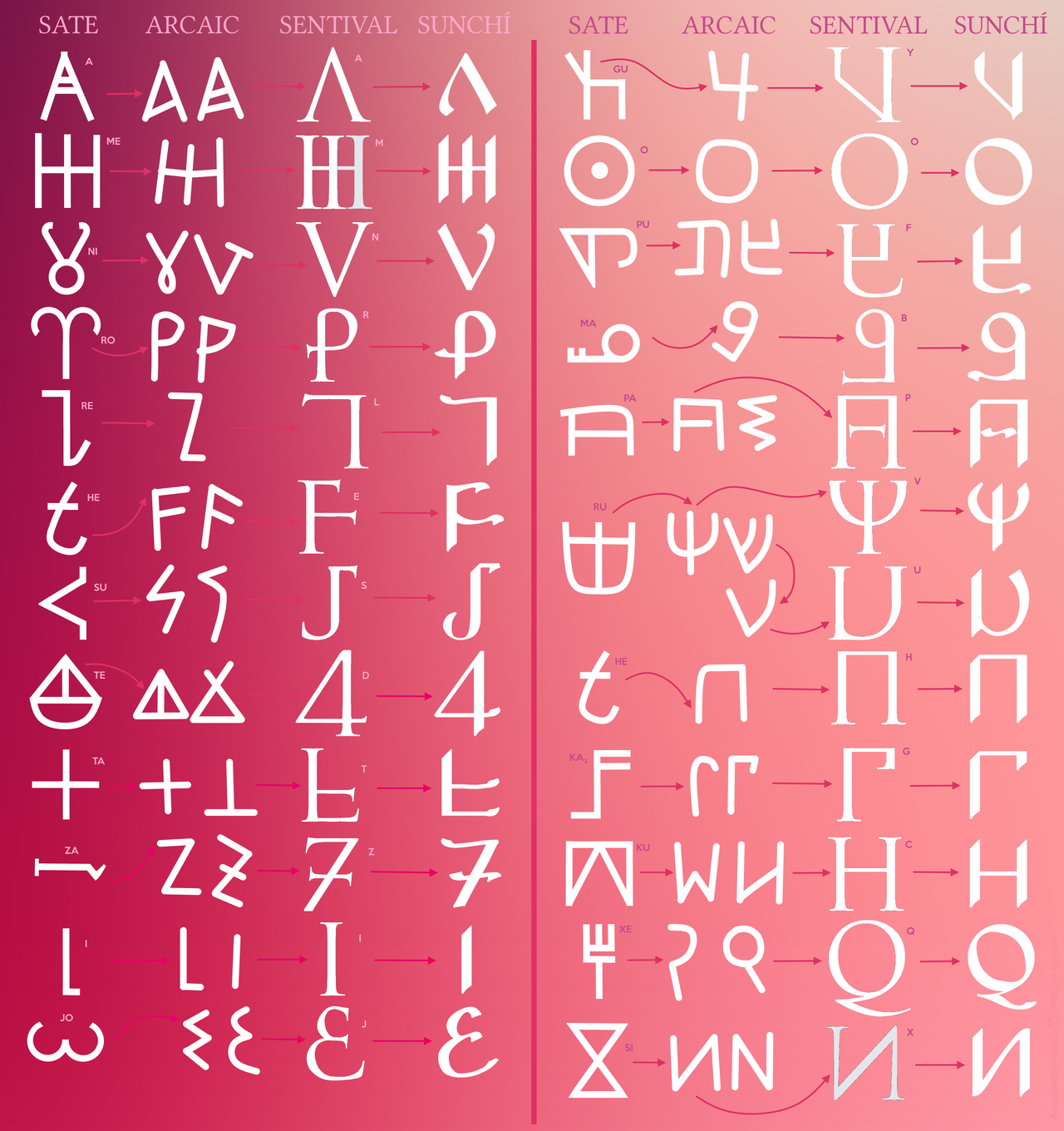 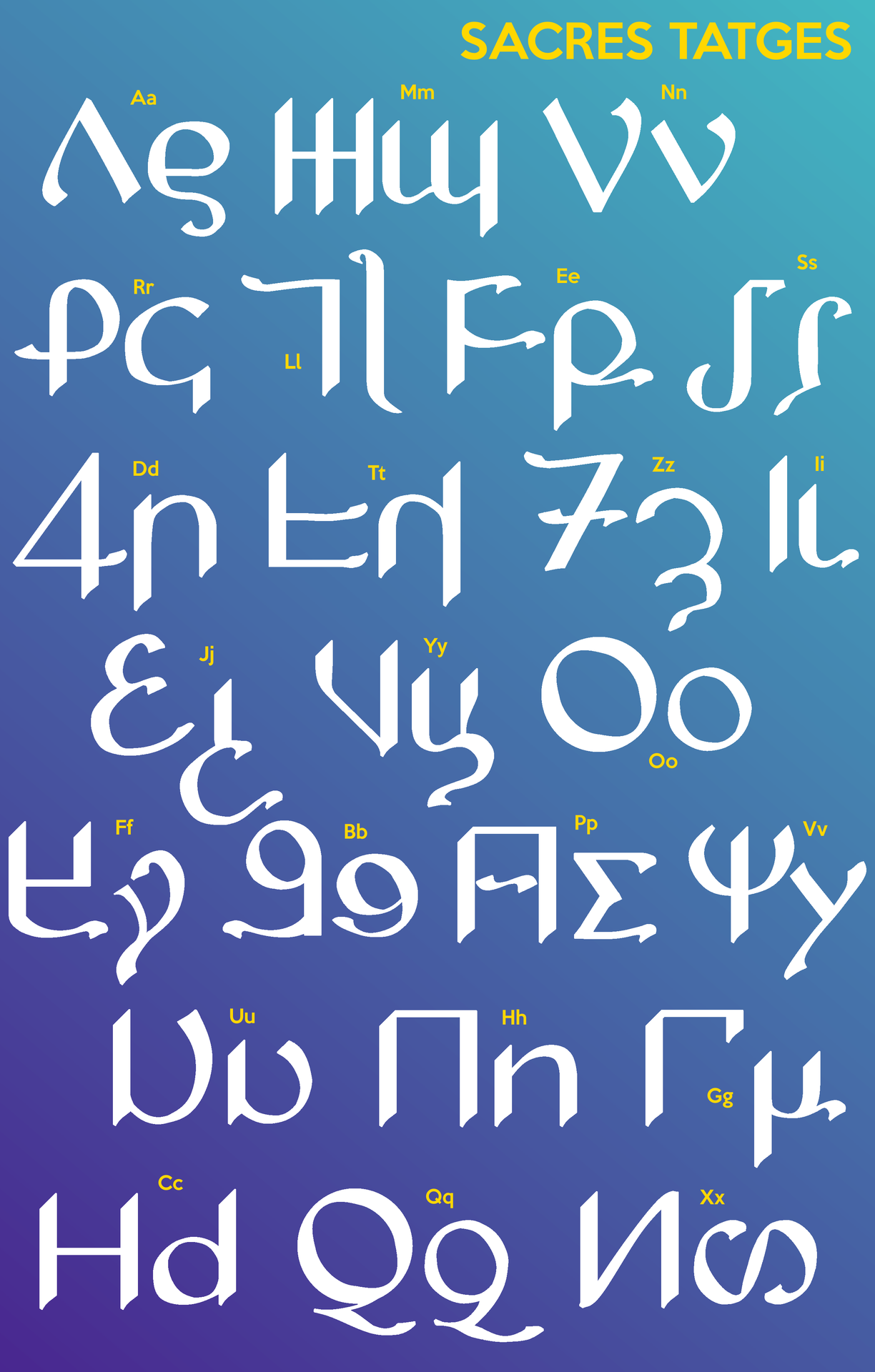 The order of the alphabet is as shown above: a m n r l e s d t z i j y o f b p v u h g c q x. It was established in the 2nd revision of the Hellesan language, base on the old Megadelanean tradition with a few changes, and represents an attempt to arrange the letters with phonologic criteria. The alphabet can be divided into five series, each one headed by a vowel. Each series groups consonants so they share a few common traits:

Letters have two names, one short and one long:

Base letters are not enough to represent all the sounds of the language in relation to both orthography and historical origins, thus some letters with diacritic marks, ligatures and variants of base letters are used.

There are three non-native letters that can appear in Hellesan texts: u/ulva taŀlematze "geminated u" (romanized ‹W w›), a Dwarvish letter used in some languages with a native /w/; ke or kalpa (romanized ‹K k›), also of Dwarvish origin and used by Bredezhanian languages that don't use the Amansard alphabet or any of its variants, as well as used by some language that have casta and kalpa for different sounds; and haula "aleph" or terasme "spirit" (romanized ‹’› or ‹h›, depending on the language of origin), a Dwarvish consonant for /ʔ/. 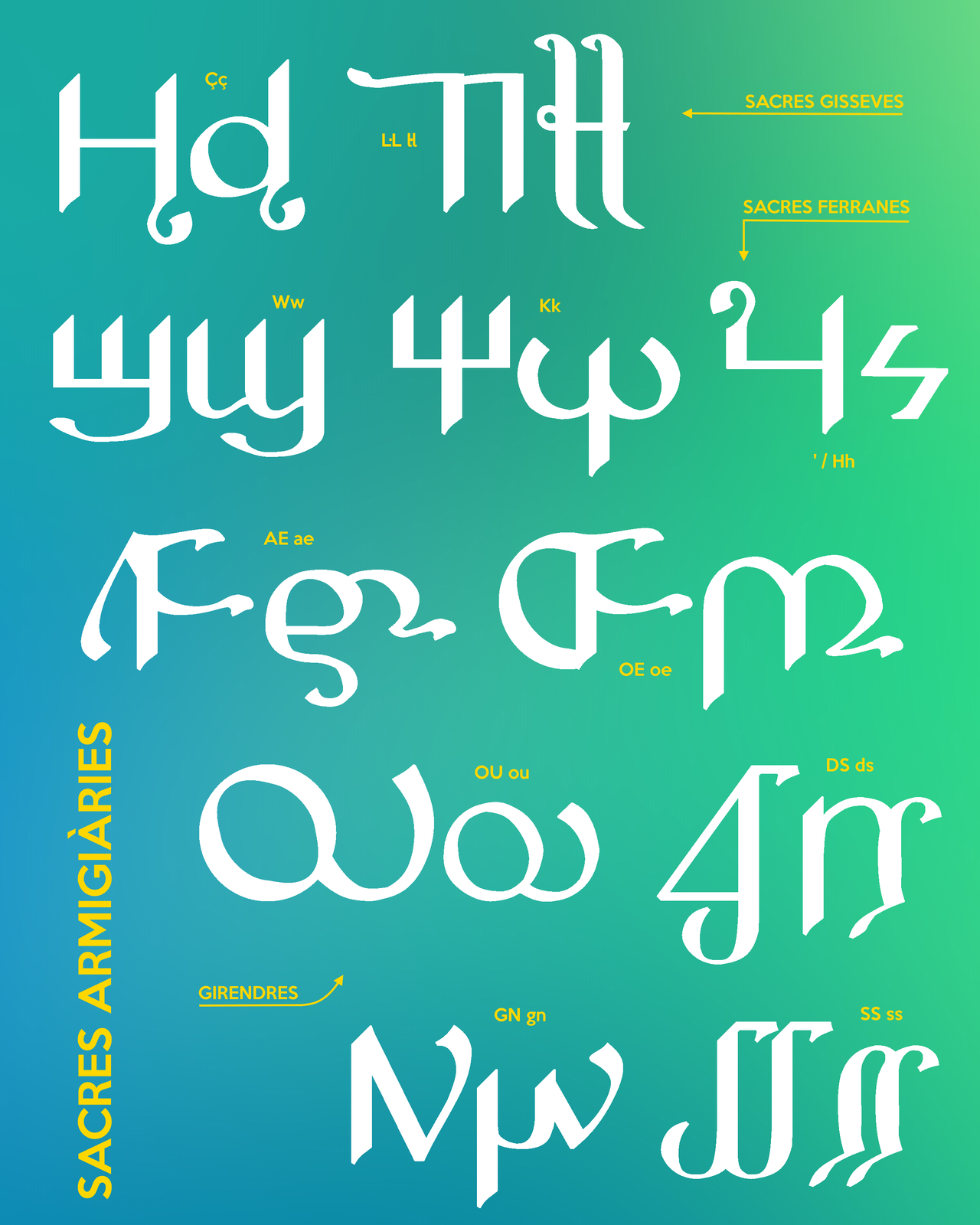 The shape of letters

The shape and size of upper case, lower case and small caps letters are determined by common rules to all the languages using Sardanyese Amansard. All letters have a body (estor), the core from which other elements like heads (tucs), arms (ràms) and feet (madans) are put to give a letter its final shape. Osca (‹O o›), since it is a perfect circle, represents the ideal basis from which to develop all the other letters of the alphabet; its height and width draws an imaginary box (talme) that determines the maximum height and width of any other letter's body.
For upper case letters the body has the same height as the box, being allowed to have arms and feet but no heads. Lower case letters can have heads, arms and feet, with the first ones never surpassing upper case's superior limit, the only exception being lower case lamna, whose upper part (its head) surpasses the limit in many typographic founts and, so often, in hand-written texts. The ideal height of a lower case body is of about 2/3 that of its upper case counterpart, at least in typography.

Upper and lower case osca in their respective boxes, which determine superior and inferior lines for the rest of letters.
The accompanying letters are a sample of how heads, arms and feet (blue) relate to bodies (orange) and lines (magenta).

Small caps (sentivelles) are a version of upper case letters where the body's height is limited by lower case's superior line, all resulting letters being inscribed within their box, this is, that all arms and feet they may have cannot stick out the limits of the box. That forces some letters to adopt slightly different shapes. In written works small caps are always used within the text, never on titles, to represent the text of inscriptions, placards, signs and posters. In some works it's also common to use them in the first words in a chapter, where the first letters appears in upper case and the rest in small caps, and can also be found in all or part of the information written in the frontispiece and title page, the half-title and the postface of a book. In footnotes small caps are used to highlight certain information, like surnames and names of aforementioned individuals or the author of a work, this practice comming from the ancient custom of writing people's names in small caps. In dictionaries and technical texts may be used in many abbreviations.

Numbers and other mathematical signs

The numeral system used in Hellesan is the one known as Megadelanean (megadelani), decimal and with digits representing 0, 1, 2, 3, 4, 5, 6, 7, 8 and 9, in upper case and lower case versions. Upper case digits are inherited from the old sunchí style, written with pen or calligraphic brush, symbols derived from the ancient Peran-Sarden numbers. Lower case digits are the cursive variant based on the sunchí style. 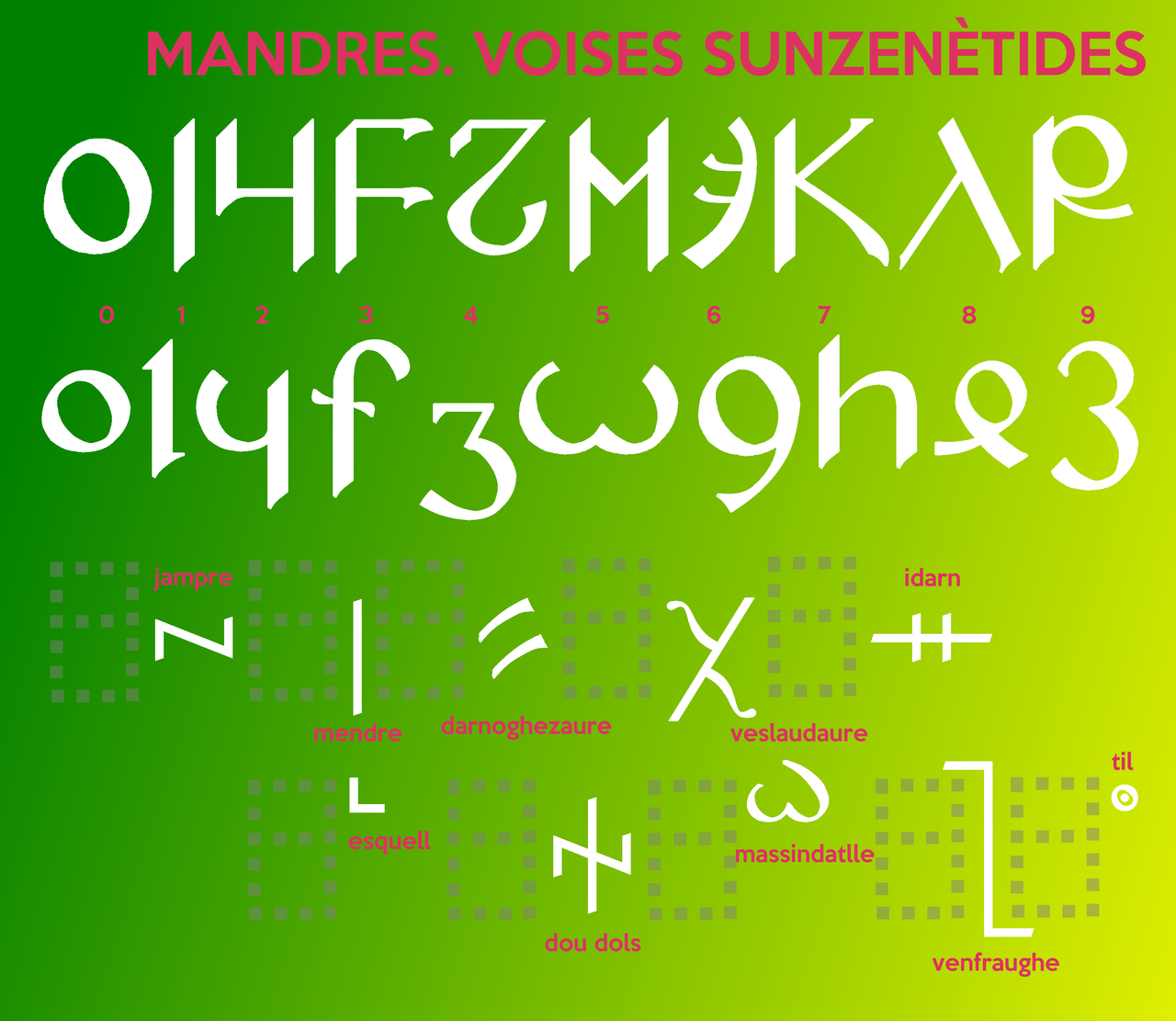 In the old system the use of upper and lower case numbers was not aleatory but represented certain functions. Thus, upper case forms were the preferred ones to write years, and monarchs' and other rulers' ordinals, and they also headed subdivisions of thousands in long numbers, as well as integers in decimal fractions, while lower case forms were the common ones in mathematic operations and equations, to express decimals numbers, and when a date or number was written as if it was another word in the text.
Nowadays thousands are separated with a floating incision, a kind of punctuation mark used as a comma, upper case forms being reserved for when numbers appear in titles of books and, within a text, to write dates in abbreviated format of the kind 00-aa-0000, where zeros indicate, respectively, the day (left) and year (right). Lower case digits may be used when it is not desired to write a number, short or long, with letters. 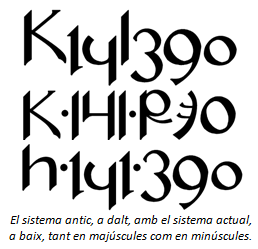 The old system, above, with the modern
way in both upper and lower case.

Most common mathematical symbols (voises sunzenètides) are addition (jampre, jampaure), subtraction (mendre, menaure), multiplication (darnoghezaure), division (veslaudaure, veslaure), and equals (idarn "equal", venfretz "result"), plus-minus (dou dols), percentage (massindatlle), fraction (venfraughe) and degree (esquell "sexagesimal degree" and til "temperature degree"). The first four are put, separated by one space, between both amounts of the operation, always written in numbers. In a similar fashion equals sign goes at the end of the operation, separated by a space from the surrounding numbers. Plus-minus goes before the number it determines without space between it and the number. Percentage sign appears flown, although in small caps numbers can appear on top of the number, as if it were a diacritic mark. Fraction sign, no matter which version, separates the parts of the operation without spaces. Degree sign, both the sexagesimal and the temperature ones, appear flown, although in small caps numbers can be put on top.

Incision signs or, simply, incisions (immorsavets) are thus named because they separate the text in parts delimited by concomitant pauses more or less subtle depending on the intonation given. Incisions affect the text at the morphological and syntactical levels, and are attached at the end of the last word before the pause, with a space resting between the sign and the next word if the text continues in the same line. 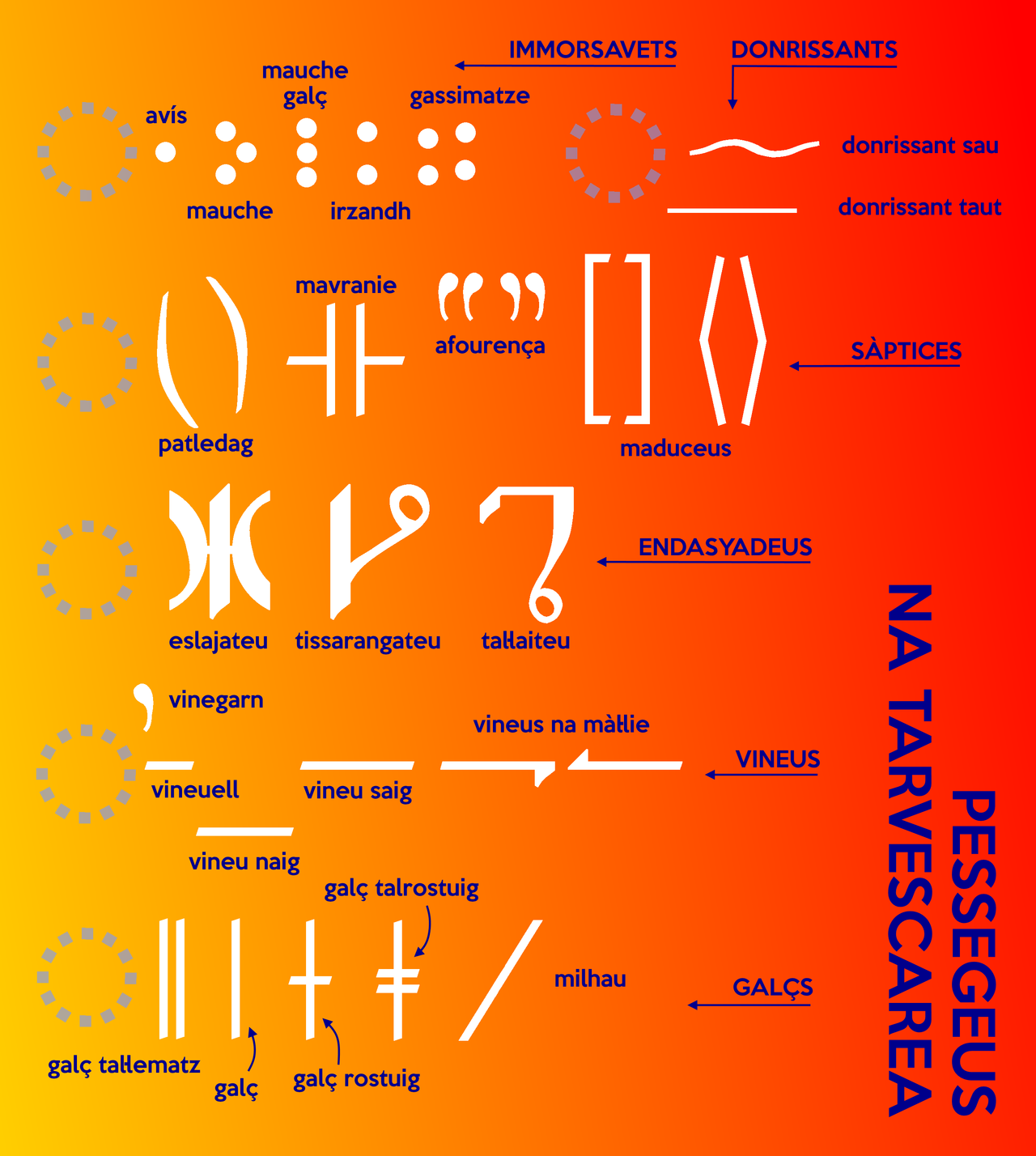 Omission signs or, simply, omissions (donrissants), indicate imaginary lagoons of text that point to an interruption in the discourse that can be produced voluntarily by the narrator or, in a dialogue, when there's an interruption. If the interruption is voluntary, desired, or, on the contrary, is introduced by one of the dialogue agents, we speak of soft and abrupt omissions. The two signs used for such cases always go at the end of the affected sentence and have the width of an upper case màu (M).

Capsules (sàptices) are punctuation marks that encapsulate words or pieces of text. They always go in pairs, consisting of an opening and a closing sign that are reflections of one another.

Toner signs (endasyadeus) are thus named because they indicate feelings or intentions in the written text that in the spoken language are habitually expressed with notable changes in the tone used. Like incision signs they're written just after the last word in the sentence; if this is followed by a subtle pause a breath (comma) or stick closing (semicolon) must be written, following the toner sign, but if a new sentence starts in the same or next line it's not necessary a closing dot.

Hyphens (vineus) are horizontal lines with various functions, essentially to tie and to separate. The only exception is the apostrophe, which it originally was a small vertical hyphen to mark an elision.

Sticks (galçs) are signs consisting in vertical thin lines with different functions, but always with a separating or differentiating nature.

The diacritical marks (noeprames) used in Hellesan use to go on top of vowels and consonants and, in a few cases, below them. They're symbols smaller than a lower case letter, generally between one third and one fourth of a lower case's body height. Some of the diacritical marks shown are not native nor traditional in Hellesan yet can appear in some non-harmonized loanwords. 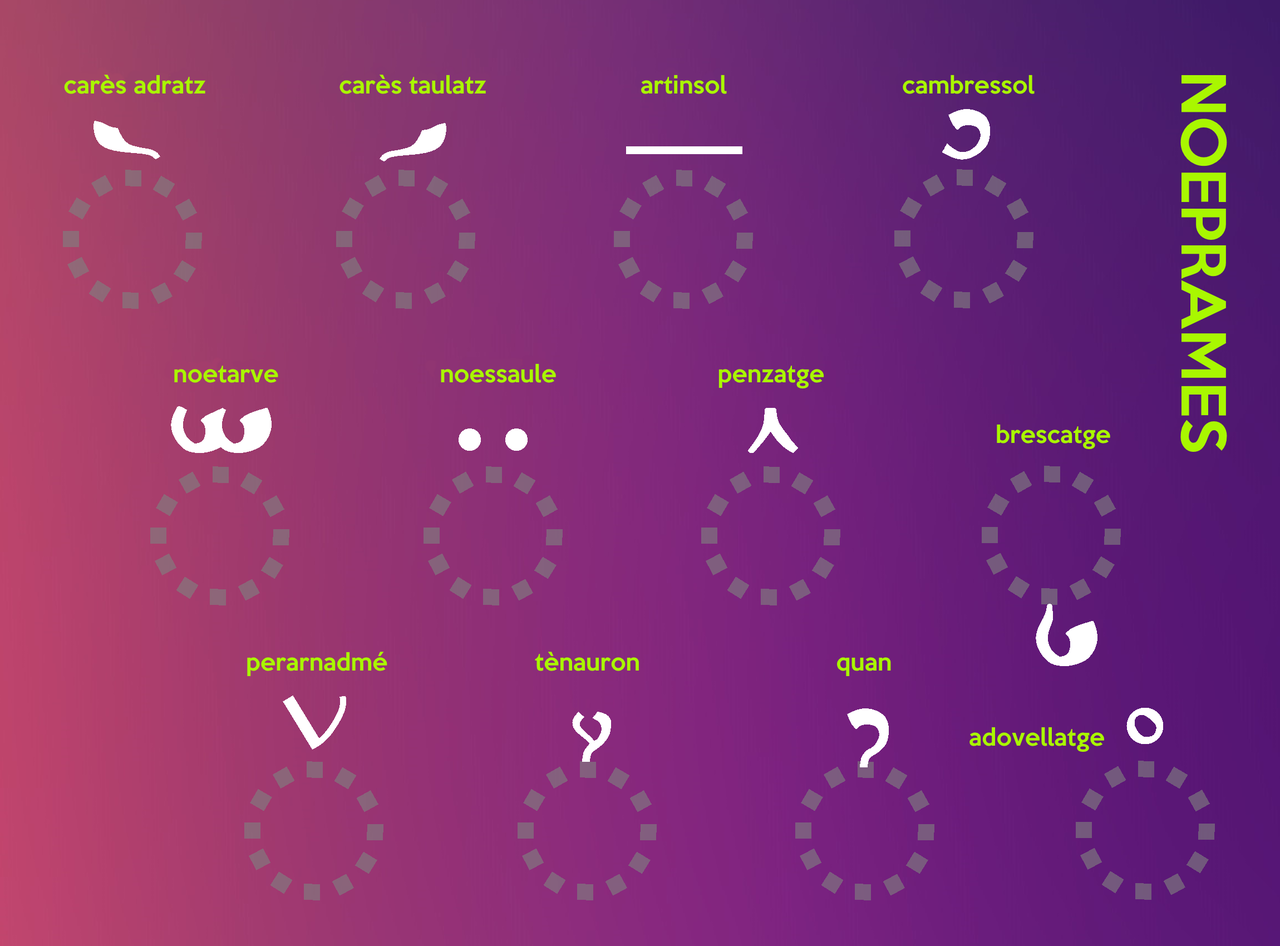 These are Hellesan's accentuation rules:

Amansard's most common abbreviations (amargatges) in Hellesan include a series of symbols consisting of old scribal abbreviation marks, ligatures and logograms. 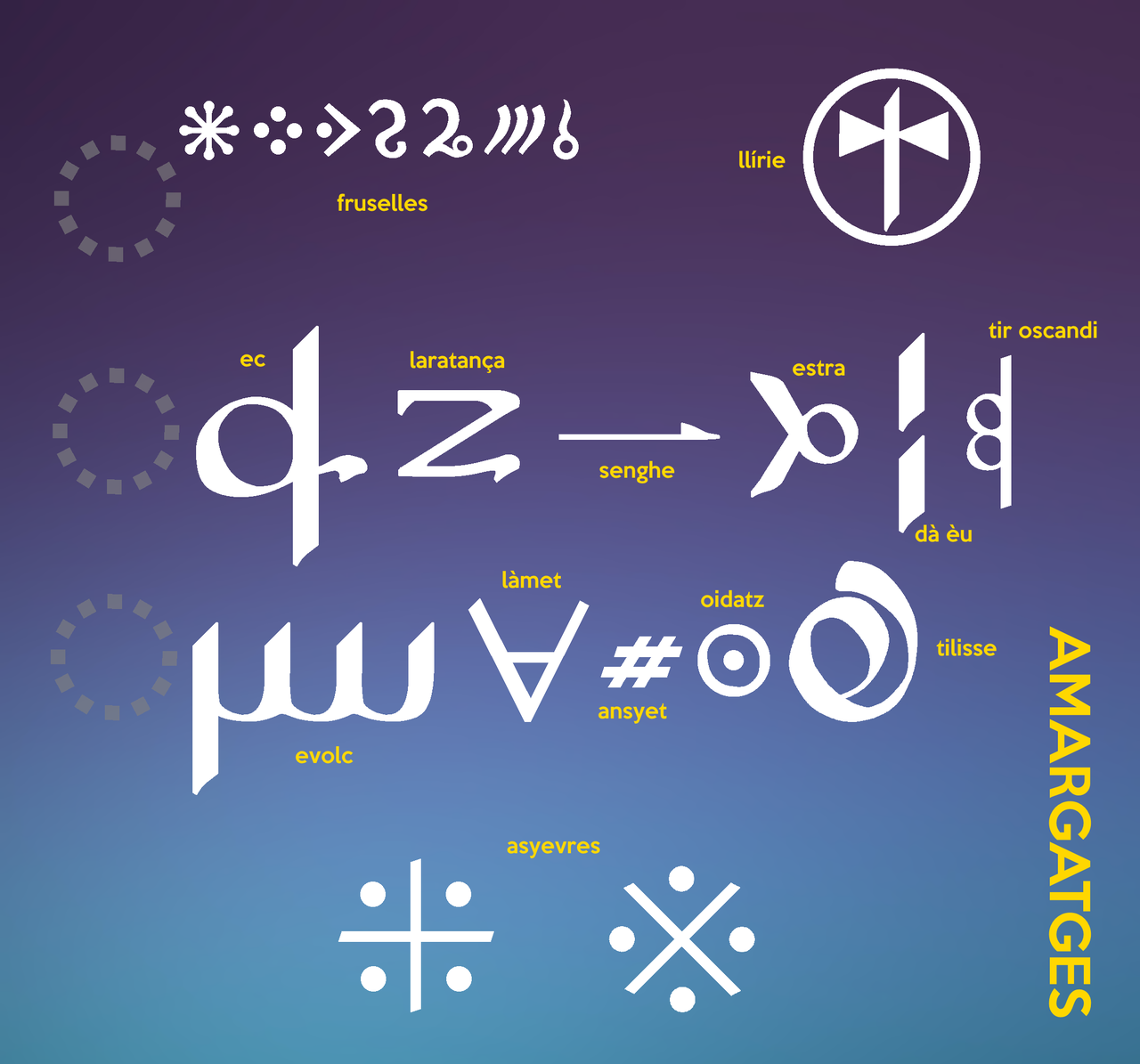 Some abbreviations are done with letters. Here we present the most common, romanized (a bullet represents a breath, or comma):

Ordinal indicators are the abbreviations of ordinal numbers, written with the number followed by the last letter of its ordinal noun. Therefore, mintar and mindre "first" give '1r' and '1e', noscar and noscre "second" give '2r' and '2e', and the rest of ordinals, all ending in –ar (redar, sartar, brenar, gisar, etc.) give '3r', '4r', '5r', '6r', etc.

return to The languages