The ancient Hellesanid longitude units, of Sateperan origin, are derived from the foot (303'636 mm or 30'36 cm), the base unit of the ancient system of longitudes and distances used in the Megadelanean basin. The Sateperan divisors and multiples are inferred from the Fibonacci sequence (1, 1, 2, 3, 5, 8, 13…): therefore, divisors are ½, 1/3, 1/5, 1/8, 1/13, and multiples are x2, x3, x5, x8, x13.
These units were recovered by historical research and archaeology, being proposed as the official international units in the 18th Congress of the International Measures System in the year 3514.

Notes
We ignore the origin of pad, but it may be Sate as well. It is believed that the span should have measured, more or less, the same as the current one. In Imperial Measures and Rules it's briefly mentioned, saying «widely used, common throughout the Megadelanya […], with little error margin in the variation of this measure».

Free measurements
The dag ("fork"; m; pl. dags) is the distance between the tips of the thumb and the index when they form a right angle.

The reckoning of time

The use of number 60 and its divisors and multiples in the reckoning of time is due to the ancient Cassardians. They divided the year into 360 days, as they used the lunisolar calendar then; that also gave place to the division of the circle into 360 degrees and, that of the day, into 6 great periods, each one with 60 minor periods (6 x 60 = 360).
With time the system got more complex due to the need of shorter periods for domestic reasons. Therefore, Cassardian astronomers, inspired by the 360° circle, divided the day into 36 equal periods, thus creating the 36 hours day in which every hour lasts 40 minutes or 2,400 seconds. 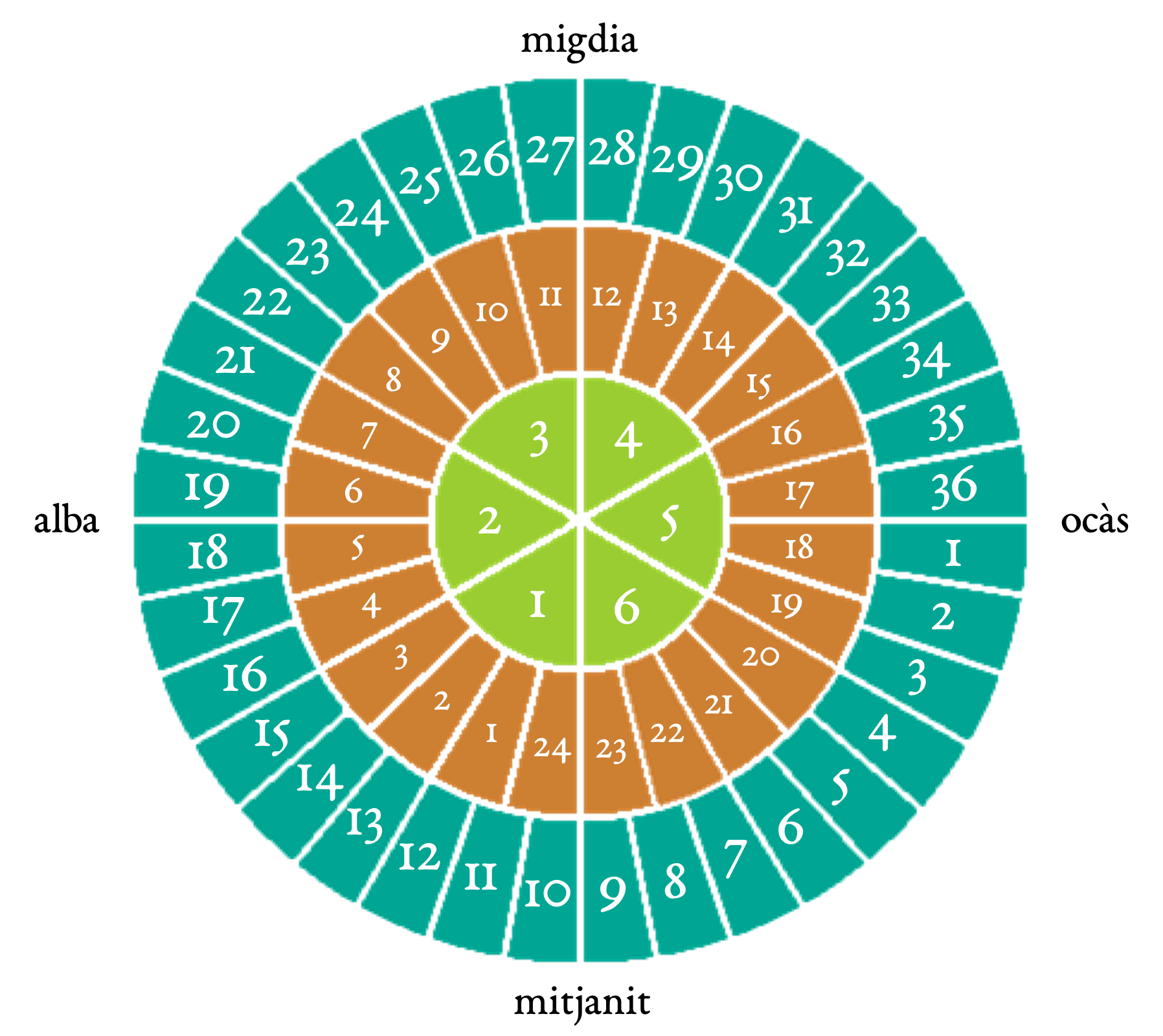 A day has 86,400 seconds. If it's divided into 360 parts (in the image above, the small divisions on the outer ring) that means that one of the parts lasts 240 seconds (4 minutes). Therefore, each of the major periods of the ancient Cassardian division lasts 14,400 seconds (240 minutes or 4 hours); the solar cycle was divided into two great halves and had per axis the sunrise (strat of the day) and sunset (end of the day). The Bredezhan calendar, in use all over Taura, uses the Peran-Sarden division of the solar cycle: days of 36 oncis (which we can translate as “hours”, although each onç lasts 40 minutes), with two axes: ‘sunrise – sunset’ and ‘midday – midnight’. Elns, though, did as ancient Cassardians: they divided the day into six periods, but with a central ‘midday – midnight’ axis.

Other ancient units of time

The Megadelanean Calendar (also known as the Euremegadelanean, Bredezhan and Midonid Calendar) is the time reckoning system used by most peoples in Bredezhanya, among them the Hellesans. The calendar is almost as old as the amount of years it reckons, and its last iteration was established in the Council of Midònia, in 1860 MR (Megadelanean Reckoning).
Since Taura is Earth in a parallel timeline, natural years are like ours, and reckoning years tend to have 365 days in hybrid calendars (360 in some lunar calendars). The Bredezhan Calendar consists of 12 months in a 365-day year. Summer solstice marks the end of spring and the beginning of summer, but also the new year. The last day of the year is bressaures 5th, followed by the first day of the year, brans 1st. A new day begins at sunset.
Each year is divided into four large times that correspond to seasons, each one having three months of the calendar, more or less. All months have 30 days, except bressaures which is a special division with only 5 days; it is known as gui(g) preninci "half week", because weeks are 10 days long. Each month has exactly three weeks, which means that all months start with the first day of the week, dimarn, and finish with dirols, week's last day. The days in bressaures are not named, only numbered, so dirols, 30 na cenller (the year's last big month) is followed by bressaures, which is followed by dimarn, 1 na brans.

A rough comparison with the Gregorian calendar gives the following: 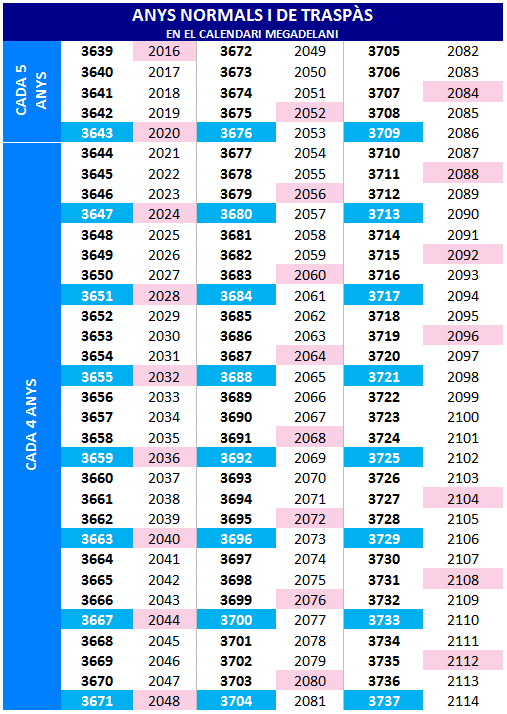 Megadelanean years don't exactly match with Gregorian years because those begin with the summer solstice, so the coincidence period is from June 21st to December 31st. Consider this when consulting tables like the one above.

The seasons and the months

The combination of seasons and months results in this typical pattern:

ISEU "summer"; from Peran isaura "hot flush".
Brans apocope of Bramsard, the deity that assures the fertility of fields and animals, from Peran Baramasarata "reaper bull".
Arges from Sarden Argymai Festia "Festa's tears", the name given to the Perseids.
Feres from Peran Ferais, related to Common Megadelanean Faris "Sirius".

The week and its days

Ancient cultures like Sates and Perans had lunar calendars without the concept of week as we understand it. Months were divided into smaller periods of time accordingly to lunar phases. With the adoption of 30-day months these were divided into two equal halves, the fortnights, of 15 days each. Later, when Sardens made further adjustments to the calendar, Perans created 5-day weeks by dividing the fortnights into 3 parts. The last step in the creation of the current Megadelanean week was to unite two Peran weeks into 10-day weeks, and adjusting them so each month had three weeks.
The names of days vary from language to language, but they are usually the result of naming days after deities or weekly tasks. The Hellesan names begin with di, which is the short form of Peran dinaki "24h day". The first five days have names of Peran origin, the oldest of all, and the last five are the new additions after the creation of 10-day weeks.
The days of the week are:

The day and its parts

Days (dinci "24h day") have the same length as ours, but they are divided into 36 hours of 40 minutes each (onç "40 minute hour"). As we said a new day begins at sunset, unlike our days, which begin at midnight. In the table below you can see the Bredezhan day compared to ours. As you can deduce, davenalle stands for "midnight" and daussort means "midday"; therefore giane "sunset" and aurefoys "sunrise".
To each half of the 24h day correspond 18 oncis. Hours are numbered from 1 to 36, the first one being the one after sunset. The hours are reunited into groups of three, six of these corresponding to night (nalle) and named gisles "vigils", and the other six to day (sort "day(light)") and named jancis "day time". 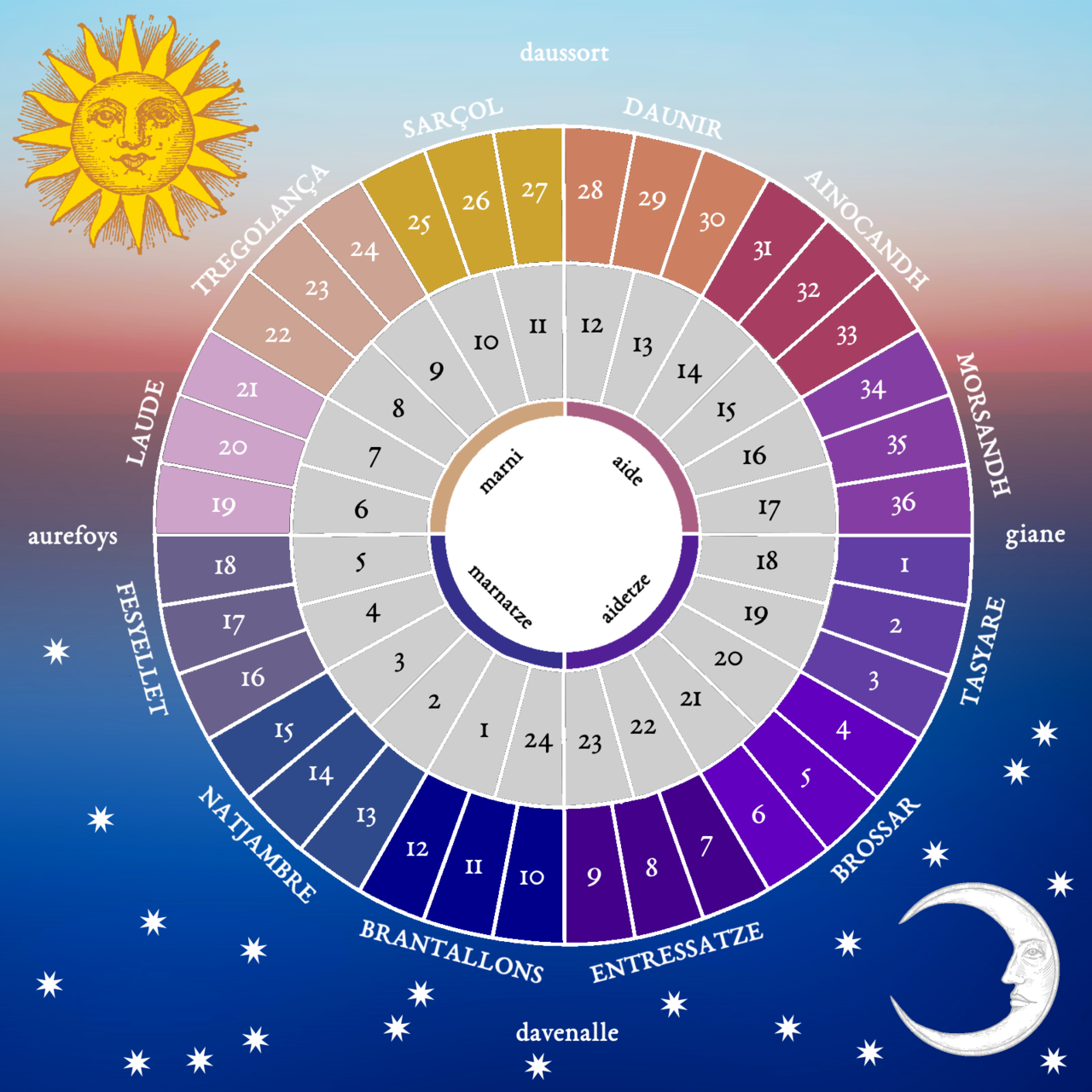 Vigils and daytimes are named accordingly to characteristic traits or associated ideas:

• Tasyare "silent calm". Considered the most tranquil part of the day, when animals return to yards and, people, to home.
• Brossar "(to have) supper". The hours dedicated to the day's last important meal.
• Entressatze "abed one". The hours to go to bed.
• Brantallons "intempestive hours". Considered the most untimely and less productive hours in the whole day.
• Natjambre "terrible night". Considered the worst part of the night, for being dark and deep hours in which spirits and night beings roam ways and fields.
• Fesyellet "rooster's call". The hours previous to sunrise. when roosters crow the most. Considered the best hours to share secrets.
• Laude "golden one". The hours after sunrise, when light takes golden and pinkish shades.
• Tregolança "bustling", "feverish time". The hours when work is most intense.
• Sarçol "sun's crown". The three hours previous to midday.
• Daunir "(to have) dinner". The hours dedicated to that meal. And to after-dinner's nap.
• Ainocandh "evening's falling". The last hours in which there's still enough light to work outside.
• Morsandh "dark entering". The hours that open the path to night.

return to The customs and traditions