Chronosynchronology
All stages of Taura's life in a single article
Anthologica Universe Atlas / Universes / Hzdhavaramheli / The customs and traditions / Chronosynchronology
Concerning dates, 'bmr' stands for "Before the Megadelanean Reckoning", this recknoning being the one used in Bredezhanya in the last 3,600 years. Years in the Megadelanean Reckoning are indicated with 'mr' only when necessary to avoid confusion.

Here we deal with chronology, which is the reckoning of time, prehistorical and historical because Taura is very old and the stuff is dense.


"Well, to begin with... what do we know? In application of our knowledge we set the following: 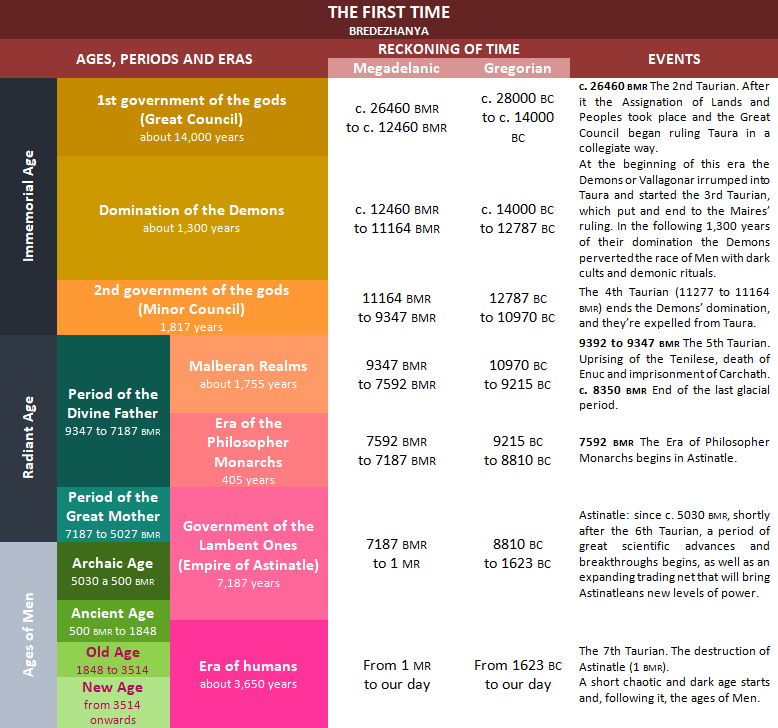 The Immemorial Age is of unknown dueation, since it begins with the creation of humankind by Gam Tinoc and Ide (Niari). This age is preceded by another one, the Timeless Age, which began with the Creation. The First Taurian War took place in 120337 bmr (adjusted 121960 bc).
The periods of the Divine Father and of the Great Mother are the two great subdivisons of the Radiant Age, the first age with human ruling, a time of hope, prosperity and great spirituality for the five human races. The ages of Men are four: the Archaic Age (5030 to 500 bmr), the Ancient Age (500 bmr to 1848 mr), the Old Age (1848 to 3514) and the New Age (since 3514). The race of Dwarves (Naucs) has their own mythological ages: the Immemorial Age is known as Age of the Underground (or Buried) Sun by them; since their settlement in the Copper Mountains, around 9350 bmr, the limit between Dwarvish ages varies with regard to those of Men. The reckoning of time by Dwarves began with the foundation of the Warm Galleries; that was in the year 48580 bmr.
By 'Ancient Times' it is understood the grouping of the Timeless, Immemorial and Radiant ages, which reunite the first six Taurian Wars. The Elder Days follow the Ancient Times and are the years of the Archaic and Ancient Ages. The Ancient Age ends with the dismantlement of the Sarden Empire, which gives place to the Grey Years or Misty Years, the first centuries of the Old Age. The concept of 'Dark Years' refers to the domination of the Demons.

Concerning the modern reckoning of time read this article on the Megadelanean calendar.

The Ancient Times embraces the different periods of Taura's prehistory. Therefore it represents the oldest block of Tauran history and chronology, and is divided into three ages: the Timeless Age, the Immemorial Age, and the Radiant Age.

The Timeless Age (from Cosmogony to c. 150,000 years) is the first age of Taura, although it starts with the Cosmogony, which is the birth of the Cosmos (and, therefore, previous to the existence of Taura). The only memories of this age are mythological and come from the sagas. During this time the Primordials or Primicerians ruled Taura.

The Immemorial Age (from c. 150,000 years to 9347 bmr) is the second age of Taura, characterized by the domination of the Gagants, which created humankind from a more primitive species they found in the Land of the Middle. It began with the creation, by Ide and Gam Tinoc, of the common ancestor to Men and Elns. This age saw the first five Taurian Wars, the establishment of primitive Elns in the Waterwinds Lands, the arrival of primitive Dwarves to Eurede through the Road of the Forest, the unstoppable expansion of humankind throughout the emerged lands,  and the arrival and domination of the Demons, and their subsequent defeat.

The Radiant Age (from 9347 bmr to 5030 bmr) is the third age of Taura. It was an original period from humankind's point of view because it saw its consolidation as a dominating species while the first civilizations began to take shape.

Period of the Divine Father

From 9347 bmr to 7187 bmr. Rising of global temperature. End of the Iced Age and rising of the sea level.

From 9347 bmr to 7582 bmr. Fifth Taurian. Berans to Eurede and northern Armasca. The realm of Migedaur is founded. Naucs are already in the Copper Mountains.

Era of the Philosopher Monarchs

From 7582 bmr to 7187 bmr. Foundation of Astinatle. Agricultural peoples in the Land of Rivers.

Period of the Great Mother

From 7187 bmr to 5030 bmr. Agrourban eclosion. The rising of the sea level continues. Bloom of arts and crafts such as navigation and earthenware. Cult of Niari and Rianame.

Government of the Lambent Ones

The period of Taura's ancient civilizations. It's divided into two ages: the Archaic Age and the Ancient Age.

Period of the Great Wise Ones

The Period of the Great Wise Ones started in 5030 bmr and ended in 2900 bmr. It's the age of the Twin Monarchs or of the Two Oracles, and is characterized by the development of writing and market economies, of trade, religion and long distance travels. Emergence of divine pantheons. Agrourban emergence in Hellesanya. Urbanization of Satic main settlements in Caledia.

Period of the Heroes

The Period of the Heroes started around 2900 bmr and ended in 500 bmr. It's the Age of the Sun Horns. The Sun Mountains are built. In Hellesanya the Sate civilization reaches its maturity; it's the White Palaces Culture. Destruction of the palaces after several earthquakes, and fast reconstruction of the same (Great Palaces period), which coincides with Mines.

Period of the High Princes

Period of the Great Monarchs

The world shaped by the current common culture, the Bredezhan civilization.

The Old Age (from 1848 to 3514) saw the definitive end of the Elder Days, with the Sarden inheritance still alive in many areas of the Megadelanean basin, but determined by new sociocultural contributions taken during the last centuries of the Sarden Empire. Therefore a new political, social and ethnic mosaic was configured around the Megadelanean sea, from Eurede to the Rodis, which gave birth to a new culture, the Bredezhan civilization. The Old Age is divided into two periods: the Period of the Leaders and the Period of the Relevants.

Period of the Leaders

The Period of the Leaders spans 830 years (1848 to 2678) and is characterized by the modification of the cultural and ethnic scenario after the birth of new nations, economic systems, and political entities. The period ideally ends at the conclusion of the War of the Knowledge. In Hellesanya the period has three main epochs: the Misty Years, the Lingering, and the Advancement.

The Misty Years (1848 to c. 2000) saw the definitive end of the Sarden world and the arrival of new peoples that settled the shores of the Megadelanean sea, intermingling with the native peoples. The ethnic and social scenario began to change rapidly but with occasional abrupt moments. It's the small dark age before the revival of culture.

The Lingering (c. 2000 to 2483) saw the consolidation of a new cultural koiné in Bredezhanya. In Hellesanya, fragmented into many tardoperan petty states, the Carmanesque culture is forming and thriving.

The Advancement (2483 to 2678), which starts with Estam Camerabert's call, moment that marks the starting point of the birth of the Hellesan nation. The period culminates with the establishment of the Crown of Hellea, the Disruptions of the Six-hundreds, and the War of the Knowledge, the latter a short but principal moment for the beginning of the Ressurgence.

Period of the Relevants

The Period of the Relevants lasts 836 years (2678 to 3514) and is characterized by the consolidation of the Bredezhan ethnic map and the reestablishment of the Euremegadelanean civilization. It was a vibrant time in many fields, especially in science, economy, and politics. It is divided into three main epochs: the Ressurgence, the Languidness, and the Reckindling.

The Ressurgence (2678 to 2846) was characterized by the recovery of the knowledge of the Elder Days and a bloom in science, the birth and expansion of mercantilism, the slow but progressive technification of manufacturing industries, a fast and sudden demographic growth, and the consolidation of democratic forms of government paired with the rise of imperialism and the strengthening of absolutism.

The Languidness (2846 to 0000), characterized by a scientific stagnation in the theoric field after its consolidation but the progressive evolution of the practical field, often outside law. A narrowing of the cultural sphere with a certain preference for decadent themes and styles, and an economy affected by intermittent episodes of devastating wars, bad havests, epidemics, and hunger.

The Reckindling (0000 to 3514), characterized by the recovering of the past disasters, albeit slowly and with a clear conservative tendency in all areas (science, cutlure, economy, demographics...). Towards the end of the period science and technology experience a revival that, in turn, brings back the vitality to politics, economy and official culture. It was a moment of great revolutions and great discoveries, and the beginning of an industrial revolution powered by steam and controlled by transnational enterprises.

The New Age is the most recent of all Tauran ages. It began in the year 3514 after the conclusion of the War of Empires, which marked the beginning of the dismantlement of the colonial empires and economic systems. This age represents a turning point with respect to the Old Age, since it's experiencing very important changes and discoveries in the areas of technology, science, culture and politics. It is generally divided into two main periods: the Awakening, and the Accelerant.

The Awakening spans 82 years (from 3514 to 3596) and is considered the transitional stage between the Old Age and the New Age. The period began with the conclusion of the War of Empires and ended at the start of the Metanational Revolution.

The Accelerant spans the four last decades (3596 onwards) and is characterized by the downfall of old states and empires, the rise of vernacular nations, an accelerating scientific progress, the revival of old arts and crafts, and the rise of metanational enterprises.
Towards the singularity...

return to The customs and traditions