It's not a mystery and shouldn't come as a surprise in which system Taura lies. It's our own, the Solar System. Normal if we bear in mind that Taura is nothing but planet Earth in an alternate universe or, if you prefer, in an alternative reality of the same universe (since there's only one universe because the Divinity is the Universe).
Well, nothing new can be said, then. Not much. The physical laws are the same in both realities, and the Solar system works in pretty much the same way in both realities, too. Here we can only briefly relate how the Rings of the Sun are. Just for the record. Should we talk about the constellations here? These are human creations, so perhaps we should put the stuff where it corresponds, in The customs and traditions section. We'll see. At least we'll discuss here the planets and their names, and the nature of the Sun and the Moon (Taura's moon), although this is already covered, in a certain, more theological way, in the article on Cosmogony (Pamfènoe's book on the origin of the Cosmos).
Most of the information in this article is taken from Aareus' The Non-Finite Encyclopedia of Gods, which deals with the secrets of the Cosmos.

The Rings of the Sun

The Rings of the Sun1 is the solar system in the Tauran universe. Armaŀleghelim is another possible name, erudite, in Hellesan.

The system is composed of Armall, the Sun, and the planets orbiting it in a gravitational bound: Varmarç, Jevesa, Taura, Toltè, Fenezir, Zevre, Varanda, Nangars, and Nembre. Between the planets and the other bodies of the system lies the interplanetary medium, a quasivoid that fills the vast space of the Armaŀleghelim. Such medium is a quasivoid ("almost empty space") because it has interplanetary dust, cosmic rays, and hot plasma from the solar wind; in essence, it's a plasma medium.
The plasma medium is used by the Primicerians as a means of travelling and communication, and is known as Jera2. This is not to be confused with dark matter, which is the dark brownish reddish yellow crystalline substance that glues the Cosmos together, what the Elders knew as aether, the quintessence. According to arcane knowledge, when Ermès created the Cosmos, it built a few portals to connect the different parallel realities that compose it, but once the heavens were created, these portals were shut or, according to some sources, destroyed.


«In the beginning God created the heavens and shut the gates of the Universe. Open to God!» 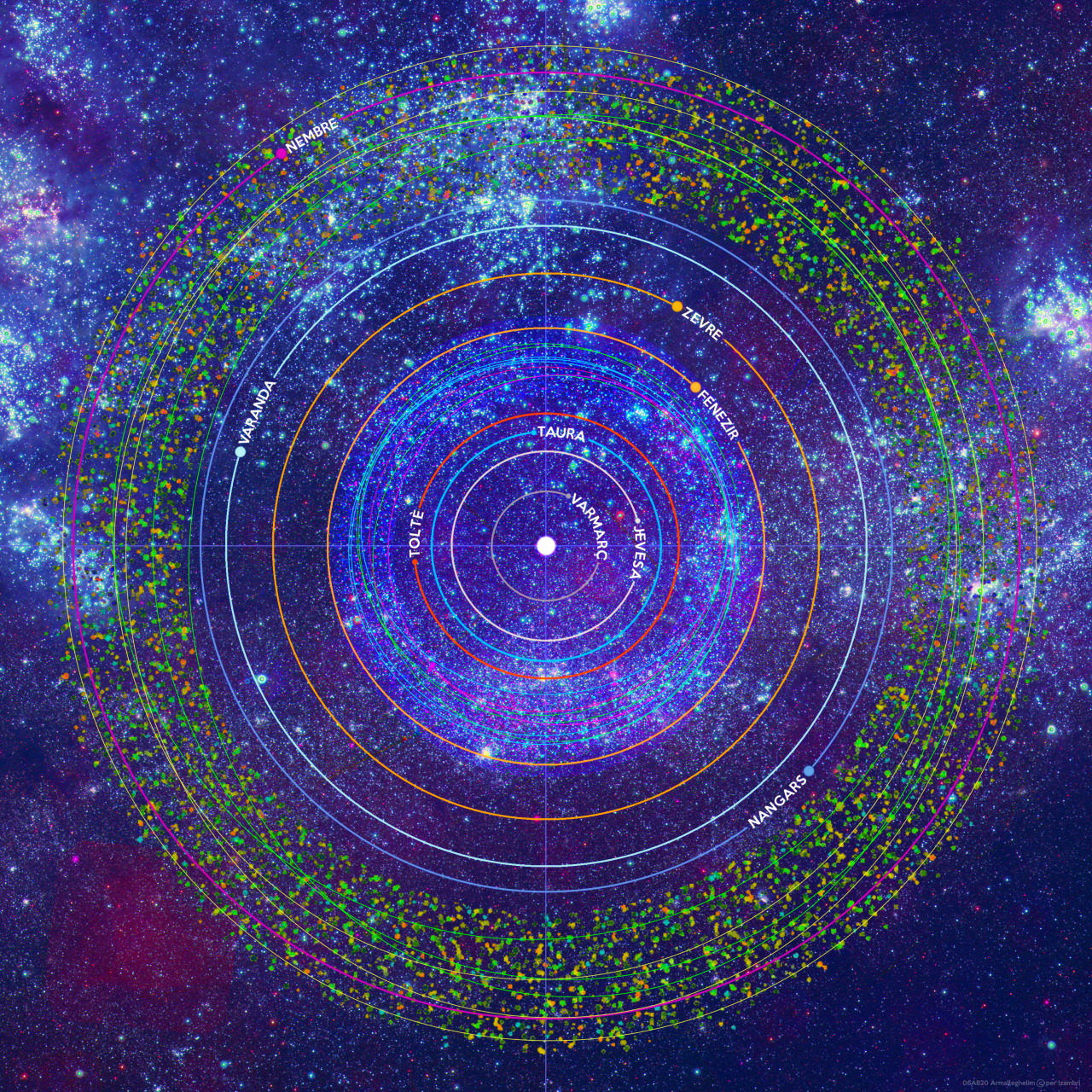 The Inner Rings (Argends Enerdereus) contain the four terrestrial planets, so called because they have rocky surfaces. In far more primitive times, Jevesa, Taura and Toltè had liquid water on their surfaces, but only Taura managed to keep it, while the water in Varmarç, Jevesa, and Toltè is now under the surface or in the form of quasisuperficial ice.

Varmarç is the first planet from Armall. Its year is the shortest, with only 88 days, and it's also the smallest planet of the Rings. Due to its proximity to Armall, Varmarç experiences dramatic changes in its temperatures, with very hot days and terribly cold nights. This proximity to Armall means the planet can only be seen near the western horizon after sunset or eastern horizon before sunrise, usually in twilight.
Varmarç has a very thin atmosphere of oxygen, sodium, hydrogen, helium, and potassium, and impact craters abound on its surface. The poles are permanently cold, with temperatures closer to 100 °C, and water ice and frozen organic compounds can be found in these regions.

Jevesa is the second planet from Armall, and Taura's twin sister. Like our world, it has continents and seas, mountains, plains, volcanoes, and an atmosphere. But Jevesa lacks life. It once had it, back in younger days, but all its primitive life was lost, and now Jevesa's atmosphere is poisonous, with clouds of sulfuric acid that create a perpetual greenhouse effect all over the planet, to the point that its surface is hotter than Varmarç's. The hottest in all the Rings of the Sun, in fact.
As one of the brightest objects in the sky, Jevesa has been playing a major role among human cultures both in prehistorical and historical times. Among other things, it's considered the dawn star, a symbol of faith and hope to many peoples.

Taura is our world, the planet blessed by the Primicerians who make life possible in what once was a barren world, millions of years ago. Taura is the only planet in all the Armaŀleghelim with surface and atmospheric water sustaining life, the reason it's nicknamed Water World, Blue Planet, and Mirire3.

Toltè is the fourth more distant planet from Armall. Its surface is a cold desert covered in rusty iron dust, the reason of its reddish colour, which ancient peoples associated with spilled blood. Toltè has a rocky surface with plains, mountains, volcanoes, and canyons, chastised by storms of many sorts, from dust devils to planet-engulfing dust storms.
Millions of years ago Toltè had large amounts of surface water, and it sustained life, primitive yet complex enough. Its atmosphere was warmer and wetter, and rain was normal and common. Rivers run through its surface, and the planet enjoyed thousands of small lakes, as well as one large ocean in the northern hemisphere.

Toltenan Primicerians managed the planet's life for many eons, until a series of catastrophic events generated by these Primicerians shaped Toltè as we know it today, a desert world. These Primicerians wandered the barren world in despair until they were contacted by Enuc Babalzec, who suggested them to come to Taura, thus starting the wars against the Maires and the Vallagonar.

The Dusty Belt (Hellesan, Fitze Suïsse) is the name given to the asteroid belt between the terran planets and the giant gas planets. Is thus named because of the thinly distributed dust particles that make it, along with several asteroids and some minor planets.

The four giant gas planets belong to the Middle Rings (Argends Enerdoans) area. They are larger than the terrestrial planets, and mostly made of gases like hydrogen, helium, and ammonia, although they have solid cores. Varanda and Nangars have more atmospheric water and other ice-forming molecules, such as methane, hydrogen sulfide, and phosphene, that crystallize into clouds in the planets' frigid conditions.

Fenezir is the first of the gas giants and its larger member by difference, with a mass that is two and a half times that of all the other planets combined. Its main gases are hydrogen and helium. Its surface is made of bands of swirling clouds of various colours, from white to red, as well as shades of brown and orange.
Toltè is visible from Taura, making it the third brightest object in the sky, after Nyare and Jevesa. Ancient peoples knew of its existence, and used its roughly 12-year orbit along the ecliptic to define the constellations of the zodiac. The number twelve inferred from its orbit was also tied to the Maires and its Council of Twelve, making the planet an ancient symbol of celestial royalty.

Zevre is the sixth planet from Armall, and is known most for its rings, which are made of ice and rock. This giant gas planet's surface is mostly hydrogen and helium. Like its brother Fenezir, it has numerous moons. Its pale yellow surface is due to ammonia crystals in its upper atmosphere.
The planet was known to ancient peoples, who saw it as a simple star, and it wasn't until the 27th century that polymath Aareus first observed Zevre with a telescope, seeing its rings for the first time in history. Aareus, though, didn't see the rings with enough detail and thought that they were two small moons around the planet, each on antipodal positions around the equator. In his The Non-Finite Encyclopedia of Gods the astronomer entered a small drawing of what he saw, one circle with two smaller circles on each side, all three tied by a horizontal line; and that became Zevre's astrological and astronomical symbol.

Varanda is the Rings of the Sun's weirdo, even more than Jevesa. Its axis of rotation is tilted sideways, nearly into the plane of its solar orbit, which means it basically rotates on its side; and it does so from east to west, like Jevesa. Due to that the planet experiences extreme seasons that last about 20 years. Each pole gets around 42 years of continuous sunlight, followed by 42 years of darkness. Its pale bluish surface is due to methane in the atmosphere, and there we find clouds of hydrogen sulfide, a foul-smelling chemical. It's the planet with the coldest atmosphere, with iced clouds of water and methane. Like Fenezir and Zevre, it has rings and a set of moons.

Nangars is the eight planet from Armall, and is about the size of Varanda. Its chemical composition is similar to that of Varanda, making both different enough from the other two gas giants. Because of that both are considered 'brothers' in the astrological field. It's a distant and cold world, with strong supersonic winds. Nangars is denser and smaller than Varanda, but slightly more massive than his near-twin brother. Like the other gas giants, Nangars' atmosphere is composed of hydrogen and helium, with traces of hydrocarbons and nitrogen, as well as water, ammonia, and methane. The methane traces give this planet's blue colouring. Its weather is characterized by strong highspeed storms. Like the other gas giants, it has rings and moons.
The region directly beyond Nangars is the Disperse region, a ring of disperse icy worlds.

The Outer Rings (Argends Azerdereus), also known as the Disperse Region, is the vast region beyond Nangars, containing the outer, extremely lonely and very distant planets. That is, the Transneptunian Region, which includes the Kuiper Belt, the Scattered disc, and the Oort cloud.
It's an unexplored region, composed of many petty worlds of rock and ice. The only known celestial body that can be considered a planet is Nembre.

Nembre is a giant planet in the deep Disperse Region. It has the diameter of six Tauras and ten times its mass, and its orbit is about 20 times farther from Armall than that of Nangars. It takes the planet about 16,500 years to orbit Armall, making it an almost-outlander planet within the Armaŀleghelim.
It's a cold, rocky world with a dense atmosphere, although not as dense as Fenezir's or Nangars'. It's geologically active, with earthquakes, glaciers, mountains of ice water, icy dunes, and cryovolcanoes that erupt icy lava made of water, methane or ammonia.


Discovery: Unknown to the ancient peoples, since it's not visible to the naked eye.
Name: From Mintani Nëmeruhhı "perturber".
Adjective: Nembran, Nembrian.
Diameter: 75,600 km.
Orbit: About 16,500 Tauran years.
Day: Unknown.
Tauran star: None.