Rhetorica Your Writing System Sucks
posts: 1279, Kelatetía: Dis, Major Belt 1
message
How do your conlangs handle colour? I've been playing around with definitions and boundaries for Lilitika for some time, and have finally settled on this:

Kuma-Koban is kind of a pain, because I haven't specifically worked on color terms. Here are some color terms, which are really kind of vague.


I ought to at least figure out what a typologically appropriate color scheme. It looks like Kuma-Koban would be a type 11, since they have basic colors up to brown as well as grey. I should make a chart, since the brown colors are kind of vague, and they might have terms for dark or low saturation colors generally (based entirely on glosses, that is). Only problem would be  that this might suggest a more sophisticated system than was likely to exist at the time, in a generally pastoral society. I really have no idea.

Hālian :(
posts: 129, Alípteza, Florida
message
I love that illustration too, as well as the entire system of color allusions.

I'm not entirely sure how safir would perceive color as, since they are hexachromats — being able to perceive ultraviolet and two kinds of infrared light as well as red, green, and blue — a fair chunk of their color spectrum is unfathomable to the average human.

(Note that the exact response bands will almost certainly change between now and the mythical time of Finalization.)
?

Matrix Chronicler of the Myriad
posts: 216, Conversational Speaker message
I haven't put a whole lot of thought into colour symbology in most of my languages. However:

In Nahakhontl, red is associated with truth, goodness, Shorragites+the speakers of Nahakhontl, Zhal's family+the good gods, plus some more usual associations like blood. Blue is considered its opposite and is associated with lies, evil, lizards, and Ashkozen+the evil god, a sort of satanic Enemy figure in Shorragite religion. The ansu - of which the Shorragites are but one culture - have red eyes and such an acute sense for body language that both ansu and humans consider it virtually impossible to lie to an ansu. This has also led to Shorragites having bad reactions to humans with blue eyes.

Hallow XIII Primordial Crab
posts: 525, 侯 of Crows at Basel
message
Jalvic peoples can into glorious empire. For this reason, they only have three colour terms, except those in contact with Kangshuic mountain yak herders who know the secret of what a yellow is.

...is the basic story. I figure the three colours in question are red/black/white but I don't actually know a lot about three-colour languages and/or the realism of such a language being used at court in megavietnamese maritime trading empire, so I have so far refrained from being any more detailed.
?

2L divides colours by lustre as well as hue.  This has turned out to be a Terrible IdeaTM, because it makes it difficult to express the differences on a computer screen

Like every other damn thing in 2L, there are sixteen root colour terms (under the hyponym hvr̄jt "[to possess] colour").  Colour is the Metamorphosis/Anthesis section of vocabulary.  They are properties (Metamorphosis section of the vocabulary) and therefore verbs ("to be X coloured").

Izambri Left of the middle
posts: 959, Duke, the Findible League
message
I'm cooking an article about Bredezhanian heraldry and vexillology and, as part of its fine tuning, I'm polishing up the Hellesan colors. There's an article for them here, as a series of articles about Hellesan, although it's not finished yet.

I know it! I just copypasted the code form the Catalan article and didn't mind to change it because I just paid attention to the ending in ...ies.
I don't deny that, sometimes, I could write etimology without any copypasting involved, though. That one is a word I haven't successfully tamed yet.

Being said that I want to defend again (if I ever did it publicly) my preference for 'ie' as a general substitute of 'y' in English: etiemologie, ies, awaie, friendlie, etc...

Izambri Left of the middle
posts: 959, Duke, the Findible League
message
After reading The Wine-Dark Sea: Color and Perception in the Ancient World, a short but interesting article, followed by Distinction of blue and green in various languages I've decided to expand the Hellesan chromatic system adding six new colours differing from the rest in that each one shows a range of colours in a gradation. This is inspired by the idea that some ancient cultures didn't ditinguish between blue and green or between red and brown as we do.

The new additions are:

Veli (ultimately from Madani vitl– "sunshine, sunlight") A gradation between red or brown to yellow (from lemon to gold). Middle shades are oranges and pinks.

Peure (from Sate pu-re, of unknown meaning but thought to be related to the concept of ripening) Transition from green to red with a middle step at a dark golden. In origin taken from the colours of almost ripped fruit.

Capri (from Davarian qoparis "Murex") A range of red and purple with pink and lilac-to-teal shades inbetween. Its origin is in the name given to Tyrian purple silks from Cassardia with an iridescent finish.

Tarsyent (from Fernon tarstjan "dusky") A gradation of dark blue to some clear colour (cream or pearl, or just plain white) that to Nordish peoples represented the true colour of dawn and dusk. It was later borrowed to Peran and Sarden, and it survived into Hellesan because it's a useful word to refer to the greyish shades of some animal skins (most notably that of elephants and dolphins, both sacred to Hellesans).

Eralme (from Peran erablamas, which could be translated as "aerogrue", since the word is a compound of erbalas "sky" and glamas "blue and green; grue") A gradation of blue to white. Originally a poetic word often used and presumably invented by poet Edovi to refer to "the colour of morning sky after a rainy night". This colour is a thing in Hellesan because of the Hellesan national flag (a white field with two horizontal thin strips of dark and sky blue), commonly named s'eralmatze "the eralme-d one". In nature this colour can be found, for example, in polar icebergs.

Gable (evolution of Peran glamas "blue and green", which also evolved into Hellesan glam "blue") Hardly to define from an historical point of view since it appears quite often in ancient texts but judging by the context of the sources it seems to refer to different gradations of blue, green and purple shades. It's noteworthy that Peran glamas grouped blue, green and silver. In later Sarden scientific texts the word appears as gamalos and gablos, and it seems to refer to the concept of iridescence, not so far from the original meaning.

These gradated colours were considered by Perans as normal and common in their colour system (they also had names at least for black, white, red and yellow). Besides this they also had the concept of "metallic" as another colour, not as a mere tone of any colour. The Peran metallic colours have not survived into Hellesan except for lhaurès "gold" (the colour, different from lhaur, the metal) and blansyard "metallic black" (from Peran balantsiardu "blackberry").

Izambri Left of the middle
posts: 959, Duke, the Findible League
message
Well, this is an approximation to Peran colours (the Peran civilization is the origin of the Hellesan people), with names from the time of Archaic to Old Peran. 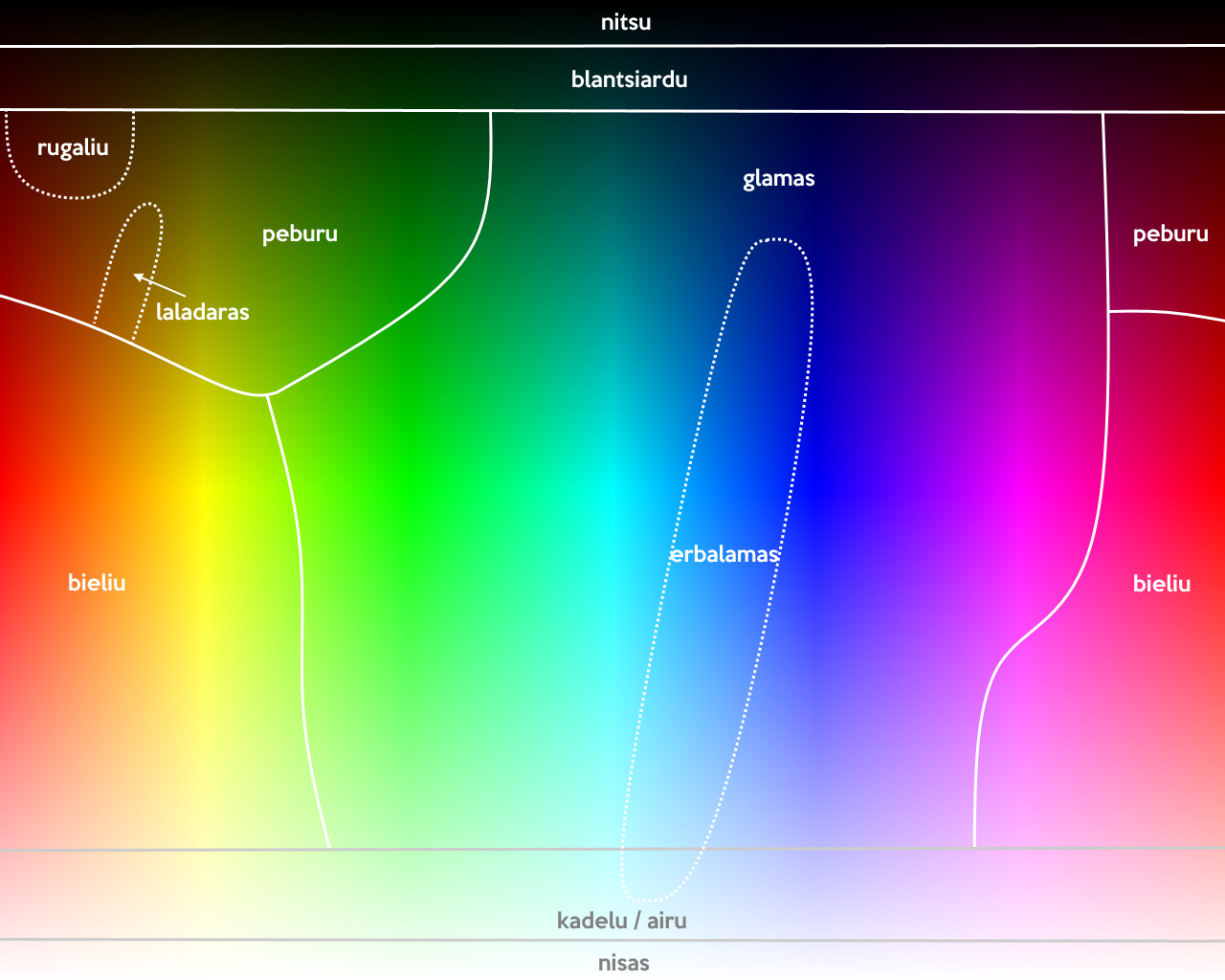 With doted lines we represent colours that share space with other colours.

Nitsu Intense/plain black; basically a matte black. Origin of Hellesan nitz "black".
Blantsiardu (literally "blackberry") Metallic black. It can show other colour reflections, basically blue and purple. Hellesan blansyard "metallic black", a mere shade of black.
Kadelu and airu Intense/plain white; a matte white that can include pearl and beige, for example. It can show very pale shades of other colours, not detected by Perans from a cultural point of view. Origin, respectively, of Hellesan ceu and aire, both "white", the main names for that colour.
Nisas (literally "snow") Metallic white. Hellesan nis "snow", used to mean precipitated iced water and its colour (a very intense and glossy white, a mere shade of white).
Bieliu From red to yellow with shades of pink and golden. Hellesan veli, not a colour in it's own right, but still a very popular name.
Peburu From intense green to intense red with middle shade of dark gold. Considered to be "the colour of ripening coloured fruit". Hellesan peure, not the name of a colour, but still widely used to refer to ripening fruit.
Erbalamas (literally air-bluish) From intense blue to white. Considered to be "the colour of a morning sky"; it is thought to have poetic origins, becoming a popular colour later. Hellesan eralme, still used to name the morning sky, even as a noun.
Glamas A gradation of blue, green and purple shades with metallic silver. Later used by Sarden scientific works as a synonym of iridescence or iridescent colour. Origin on Hellesan glam "blue".
Laladaras Dark golden or metallic dark yellow. The colour of gold. Hellesan lhaure "golden".
Rugaliu Metallic brown. A brownish colour with glossy shades of red, considered to be the colour of bronze and copper. Hellesan rogall, still used to refer to certain hair colours (brown with reddish highlights).

Izambri Left of the middle
posts: 959, Duke, the Findible League
message
If what you mean is what word Archaic and Ancient Perans used to refer to foliage the answer is... it depends. They would consider forests to be glamas, since from lon distances they are generally seen with dark shades, while at a closer look, leaves and foliage could be peburu, bieliu or glamas, depending on the shade.
Perans from the Middle Epoch had marfas, a loanword from Sarden maryphon used to specifically refer to green shades, although etymologically it means "vivid/vibrant bluish".

Izambri Left of the middle
posts: 959, Duke, the Findible League
message
And this is the preliminary chart for Nanenc colours:

Names are in Catalan:

Izambri Left of the middle
posts: 959, Duke, the Findible League
message
Interesting in its own, could help you people when working your conculture's colour-related stuff:

Link.
previous 1 2 next end
return to Department of Creativity