Poetry is a brain disease. Here is a demonstration of the symptoms, brought to you by a dead sceptic from the distant future, albeit before she became infamous for decrying the religious elements of her culture's self-invented social conventions.

The scansion for most of this stuff is dreadful and either sounded good in my head or needs severe revision.

I'll be filling this in as more are written and translated. I may even gloss some of it eventually—but be aware that the glosses are pretty unexciting.

Since many of the titles are merely the first line, I've given a more literal translation for the English ones in the title and then proceeded with a more prosaic rendition in the text itself.

(I am not actually going to translate it, it is all Latinate and that requires Effort)
?

Could you translate more of these into Lilitika?

And for the complete effect, here is the verse handwritten in Títina (with a sadly incomplete transcription, but it's enough to give the idea I think.) 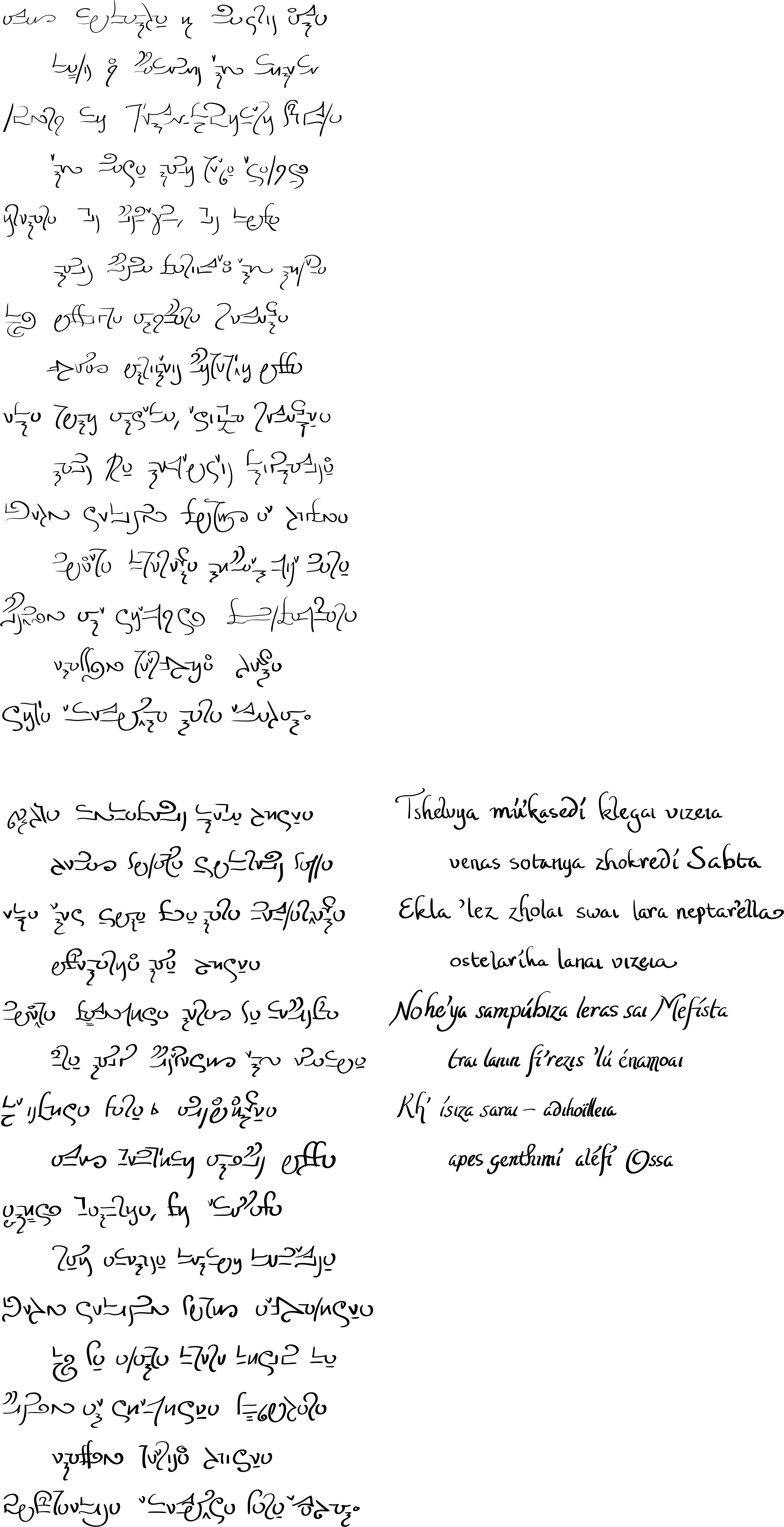 Hālian :(
posts: 129, Alípteza, Florida
message
If only I could have handwriting as pretty as that

Rhetorica Your Writing System Sucks
posts: 1279, Kelatetía, Koitra, Illera
message
Added three more poems to the first post, including one I'm pretty sure I should've disowned like Íora did...
?

Rhetorica Your Writing System Sucks
posts: 1279, Last Kelatetía of Scotland
message
Translated Don't Listen. The first half is gloomy and tips downward gradually in pitch, but the second is more uplifting. The word "aléhaitendré" as it is repeated twice sounds a bit like a bugle call. (I'd write out notes, but once again I find my lack of musical education frustrating. And, no, I'm not recording myself singing it. It would not do the song justice and you would be left with bleeding ears.)
?

Nessari ?????? ?????? ????????
posts: 932, Illúbequía, Seattle, Cascadia
message
The Lilitai as a whole are very much a people framed and to some degree defined by sorrow and their reactions to it. Fínanía is decidedly the more melancholic of the great Lilitic wordsmiths.

Rhetorica Your Writing System Sucks
posts: 1279, Kelatetía: Dis, Major Belt 1
message
It works better when you have some sense of the melody, but I admit Fínanía tends to be so drenched in pessimism that what she thinks of as being world-moving is really just a drop in the bucket. I think, in general, that her love poems at least have a chance of being more uplifting succinctly explains why she tends not to look past those things, except to criticize (e.g. Can the old ways liberate?) and to dismiss (e.g. The stars inform). She was not generally a happy person, and notably pushed away friendships with both camps of politicians (Sarthía had been a childhood rival/friend but attempted to amend things after the exodus, and Kona il Mitrajethíasa tried to make her an official speech-writer of the movement) by writing scathing criticisms of them. Like many great writers, however, her barbs were not enough to dissuade fame, at least some of which came from her habit of taking up controversial perspectives. Nor were they enough to dissuade others from trying to love her, though the relationships were short, and ended on generally messy terms. Of course, buried underneath all of this resistance is the artist's inevitable desire to be acknowledged and recognized—she wrote in contemporary dialects and continued to submit her work for publication, and tended to be a lot more affable at parties, where she swiftly and invariably got herself inebriated.
return to Scriptorium